The Road Away from Him
Jesus is Lord 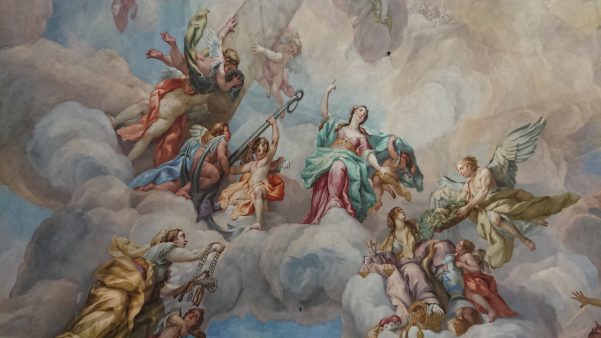 Photo by Lukas Meier on Unsplash

There are certain things “we all know” about Angels: They are spirit beings, sort of ghost-like, they take on human form when interacting with us. The different kinds of Angels include Cherubim and Seraphim, they have wings, and Satan is a fallen Angel. The only problem with this common-knowledge view of Angels is that each point is un-biblical.

The title “Angels Unawares” derives from a text that will be quoted below and is also employed to denote that we are generally quite unaware of Angels.

Are they spirit beings?:

It should be noted that the word translated Angel is malak in Hebrew, (the language of the O.T.) and is simply referring to a messenger. It tells us nothing of the nature of the messenger only the task which is being performed, delivering a message. The idea that Angels are “spirit beings” is based on three verses that are really two which collapse into one: and we should never build a doctrine upon one verse.

The first is Psalm 104:4, “Bless the LORD … Who maketh his Angels [malak] spirits [ruach]; his ministers a flaming fire.” The second is Hebrews 1:7 which quotes this Psalm. The third is Hebrews 1:14, “Are they not all ministering spirits [pneuma], sent forth to minister for them who shall be heirs of salvation?” This reiterates the Psalm in a paraphrasic manner. Thus, the latter two are simply restatements of the first.

Angels are described as being made as ruach in the Hebrew of the O.T. Psalm and as pneuma in the Greek of the N.T. book of Hebrews. In both Hebrew and Greek, the terms are correlated with wind or breath. Such is why they are described as winds rather than spirits within various translations.2See the Biblegateway sites’ “Psalm 104:4 in all English translations”: https://www.biblegateway.com/verse/en/Psalm%20104:4

In fact, the context of Psalm 104:1-6 demands this reading “Bless the LORD … Who coverest thyself with light as with a garment: who stretchest out the heavens [natural phenomena, n.p. hereafter] like a curtain: Who layeth the beams of his chambers in the waters [n.p.]: who maketh the clouds [n.p.] his chariot: who walketh upon the wings of the wind [n.p.],” thus when it comes to verse 4 a reference to a natural phenomena is contextual: “Who maketh his angels spirits [ruach=wind, breath], his ministers a flaming fire [n.p.]: Who laid the foundations of the earth [n.p.], that it should not be removed forever. Thou coveredst it with the deep as with a garment: the waters [n.p.] stood above the mountains [n.p.]” (vss. 1-6), and on it goes, making the context to natural phenomena is inevitable. The Apologetics Bible comments:

The psalmist used vivid word pictures to describe the sovereign Lord’s work of creation. The imagery was drawn from the making of a palace with tent coverings, private upper stories, and a solid foundation. The Lord uses all the elements recognized in the ancient world—wind, clouds, fire, and water—and controls them for His purpose. The Creator-King is surrounded by His servants, whether they be angels, forces of nature, or creatures of earth.3Cabal, T., Brand, C. O., Clendenen, E. R., Copan, P., Moreland, J. P., & Powell, D. (2007). The Apologetics Study Bible: Real Questions, Straight Answers, Stronger Faith (p. 876). Nashville, TN: Holman Bible Publishers.

It is not about the substance of Angels but that they, like all of creation, are there to serve God.

But why refer to them as winds? Perhaps because of what Jesus stated thusly:

Do they take on human form?:

Simply put, there is no such statement in the Bible. But if, and since, Angels are not spirits then, pray tell, what are they?

Hebrews 13:2 (the same book that some translate stating that the messengers, Angels, are spirits) states, “Be not forgetful to entertain strangers: for thereby some have entertained angels unawares.” But how so? Every single time that the Bible describes an Angel, it describes them as appearing to be just like human males (and calls them man or men), and so there is every reason to think that such is the case ontologically.

That is to say how Angels appear to be what they are in their very nature and essence, “thou hast made him [humans] a little lower than the angels” (Psalm 8:5), and they appear to be as physical as is Jesus post-Resurrection–physical enough to be touched, to eat, etc,. and yet, able to be seen and then not seen as if they appeared and disappeared.

It is our ability to see them which changes, not the transformation of the Angel. What we do find in the biblical record is God acting on the eyes of humans who then could see Angels. One example is Balaam in Numbers 22:31,

“Then the Lord opened the eyes of Balaam, and he saw the angel of the Lord standing in the way, and his sword drawn in his hand: and he bowed down his head, and fell flat on his face.”

I would even go as far as to speculate that Angels and humans could be categorized as being the same kind, except angels have added properties to their physical bodies for heavenly residence.

Do Angels include Cherubim and Seraphim, and do they have wings?:

This is another claim for which there is no biblical support. Appeal is made to vague statements such as there are “thrones, or dominions, or principalities, or powers” (Colossians 1:16); and yet, it is not specified who fits into which category.

Angels, Cherubim, and Seraphim are three distinct categories of beings: they have different titles, different job functions, and look/appear to be different from one another.

Remember, Angels do not have wings and are messengers by definition.

Cherubim have four wings and four faces (man, lion, eagle/vulture and ox) and are guardians.4In my book on ‘Various Paranormal Entities,’ I deal with a discrepancy in Ezekiel’s description of their faces. They are described as being at the east of the Garden of Eden guarding the way to the tree of life (Genesis 3:24), they are represented as two beaten gold images one with the mercy seat on each side atop of the Ark of the Covenant (Exodus 25:18, so you can throw out 99% of all depictions of the Ark which depict winged humanoid Angels), and they surround God’s throne (Ezekiel chaps 1 and 10).

Seraphim have six wings and are a difficult study in that they only appear in one text (Isaiah 6:2 & 6). Some claim that they are reptilian, because the root word seraph can refer to snakes/serpents. However, a deeper etymology results demonstrates that reptiles are referred to as seraph because their bite is fiery (due to being venomous) and the motion of fire is serpentine-like.

And what do we see the Seraphim doing? Well, “one of the seraphims … having a live coal in his hand, which he had taken with the tongs from off the altar” so that they are seraph with reference to burning, to fiery, and so I term them the “keepers of the heavenly flames”—also fire refers to cleansing, which is what is done to Isaiah: “he laid it [the coal] upon my mouth, and said, Lo, this hath touched thy lips; and thine iniquity is taken away, and thy sin purged.”

The only categories of Angels of which we do know are (regular) Angels encompassing at least one Archangel–Michael (Jude 1:9); and there may be more, because he is “one of the chief princes” (Daniel 10:13), and the Angel of the LORD (in for examples, Genesis chap. 22 and Exodus chap. 3)”

Is Satan a fallen Angel?:

This claim is based on the one just reviewed: that God’s entire administration, as it were, are Angels. Yet, Ezekiel 28 begins with the statement “unto the prince of Tyrus” (v. 2) but then to “the king of Tyrus” (v. 12): it appears that there are spiritual authorities behind human ones such as the Angel Gabriel engaging in extended battle with the “prince of Persia” (Daniel 10:13, a battle during which he had to tag in Michael for an assist).

Which is which, “prince” or “king,” is discernable from the context. In the case of the Ezekiel text, the king is told, “Thou hast been in Eden the garden of God … Thou art the anointed cherub that covereth” (vs. 13-14).

Thus, Satan is a fallen Cherub and only pretends to be an “Angel of light” (2 Corinthians 11:14).

And so we see that when we consider that which the Bible does and does not state about Angels, we come away with a view that contradicts vague common knowledge but adheres to God’s word.Ω

Ken Ammi is a long-time researcher and lecturer on issues per­taining to Christian apologetics. He has a background in Eastern Mysticism and the New Age. He is Jewish and has accepted Jesus as Messiah. You can find him online at: True free Thinker

The Road Away from Him
Jesus is Lord