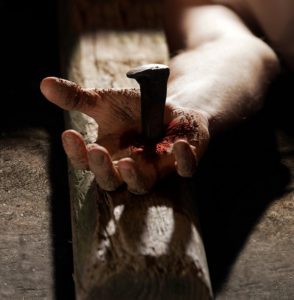 With that object in view, please allow yourself to consider this: Who would YOU die for? Your neighbor? The paper boy? A stranger? Aside from very brave soldiers, police officers, and firemen, laying down one’s life for another person seems to be a bridge too far for most people. Add to that the torture angle – not only must you die, but prior to that you will be whipped, publicly humiliated, beaten, stripped naked – before cruel men hammer huge spikes into your wrists and feet and suspend you from these horrible wounds until you die an agonizingly slow death. Even a very courageous person would likely blanch at the thought, while others are under the bed just thinking about it. Would you endure such abuse even for a very good friend? Your husband or wife? Certainly, some have endured torture and even death for God or country, or familial love, but such self-sacrifice is rare enough to be quite remarkable.

Now we should consider how many would die for the likes of someone like John Wayne Gacy? Ted Bundy? A politician of another party? And yet, we know Jesus died for all of them as well as you and me. In the Bible, the book of Romans speaks to this very issue in chapter 5:6-8:

We were helpless, ungodly sinners when Christ chose to give His life on our behalf. Not mere “strangers;” we were ENEMIES of God. Enemies?? Take a look around you. Ask yourself why so many of those who say they “disbelieve” in the God of the Bible are not neutral towards Him at all, but actively detest Him! Did you ever wonder why that is? Why would a person HATE someone he or she does not even believe exists? According to the Bible, even if one has no emotion of animus toward God, we all are born enemies of God just by being part of the rebellious race of mankind. But, Jesus Christ, who loves us, bore the agony of the cross for our reconciliation. Such an act of gracious heroism is rare indeed and is confounding in our vengeance-oriented society. We human beings often don’t just get mad at those who hurt or oppose us: we get even. And self-sacrifice is looked upon almost as a defect.

There is something, though, I believe would get me willingly up on that cross and, if you are a parent, maybe you can identify. A simple choice might do it – “Mom (or dad), either you or your daughter is going up on that cross. We are either going to strip, beat, and torture your  and drive son those nails into his flesh, OR you can go in their place. What will it be?” Parental love is so strong that, even from here, I can hear you say, “Take ME … I’ll go. Do what you must to me, but leave my child alone!”

I am strongly reminded of the truth of this even today. An article in the Chicago Tribune starts out with these words, “A 14-year old high school student convicted of plotting to kill his mother was released Monday into the custody of the mother who said, ‘I love my son, and I have nothing to fear. He told me he was sorry,’” That really says it, doesn’t it? Her trust in her son may be foolish, but it gives powerful testimony to the unshakeable and sacrificial love of a parent.

That is the great love the Son has for us. It is so hard for us to accept His love at face value, but He loves us that much! As much as you love your son; as much as you’d die for your daughter. Torture and death on our behalf is the noble gift of the Son; to win your life and freedom.

But, what of the Father? How did He show His love for us? Think about this: You’d go up on that cross for your son or daughter. For whom would you GIVE your child whom you love so much? On whose behalf would I send my daughter to her death? Whose life and security would I purchase with the well-being of my own son? NO ONE’S. Yet, so great is the Father’s love for me and you friend, He gave His only Son. From a parent’s eye view, an unbelievable sacrifice.

“In this is love, not that we loved God, but that He loved us, and sent His Son to be the propitiation for our sins.”

I don’t write this primarily to those who know God’s love and already have become convinced by their relationship to Him that He loves and cares for them. I speak to those who are vastly unsure of God’s love, who have been in cults or abusive churches, or who are completely out in the cold. The only emotion they feel from God is anger or disapproval, and the emotion they have for God is FEAR. I don’t say there is no such thing as a healthy fear of the Lord, one that brings us to a place of recognizing our need for forgiveness and a savior. But, if your fear leads to endless striving and not to conversion or, if conversion does not ease your fears, you’ve gotten the wrong message about God’s love and grace.

Some have missed the message of grace because religious traditions have gotten in the way. Yes, they have been taught about the sacrifice of Christ, but the simplicity of the gospel has been obscured by add-ons, such as purgatory, penance, law keeping, or perhaps they’re riding the “good works” rollercoaster.

No, “Paid in full” is the message of the cross. His death brings us life. His suffering gives us peace. His mediation offers us complete reconciliation. His resurrection promises eternal life to those who call on His Name.Ω