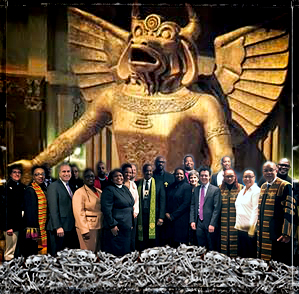 A photo from a 2017 article, Religious Leaders Bless Opening of New Planned Parenthood Abortion Clinic, Call It “Sacred Work”, has been making the rounds again recently. What type of “sacred work” could abortion possibly be? To our minds, the idea is absolutely repugnant. Historically, abortion has never been considered “sacred” by Christians, so these religious leaders, it would seem, are representatives of a different “faith path” – one rooted in ancient paganism. Abortion has been at the center of a cultural and religious divide since the first century AD. The battle only seems relatively new to our times because, as we pointed out in our blog, Everything Old is New Again, Christianity had so completely eclipsed paganism, at least in the Western world, that pagan ideas and practices were rather foreign to our way of thinking. The Christian principle of the sacredness of human life has largely guided Western culture for 1800 years. But that seems no longer to be the case.

The article Ancient Roman Abortions & Christians includes the early church father, Tertullian’s, description of the abortion instruments and procedure from his A Treatise on the Soul, chapter 25. The procedure the ancient Romans used doesn’t seem all that different from the abortion procedure most widely practiced today – dismemberment of the baby in utero. The Romans were completely amoral on this issue and had no qualms at all about dismembering a child in the womb. After all, they practiced infanticide, so why would killing a child before he or she saw the light of day be a problem? It may have even seemed to them to be more humane, since the child’s anguish would be hidden from their eyes. And in those eyes, it was solely a matter of personal preference. The Romans, in turn, seemed to take their view from Greek philosophers of earlier times:

Romans agreed with the Greek view of abortion. Some of the most eminent and respected Greek philosophers encouraged and condoned abortion. Aristotle (384-322 BC) encouraged abortion because he feared population explosion.1Ancient Roman Abortions & Christians

A population explosion in Ancient Greece? Wow! Even the argument for so-called population control, making abortion good and necessary, has been around for a very long time. Everything old is new again! Abortion was so widely practiced in ancient Rome that by the first century, Caesar Augustus (27 BC-14 AD) was concerned the empire would fall due to “population implosion,” a drastic decline in population. His concern was pragmatic of course, not one of morality.

Into that mix, a little know sect of Judaism called “The Way” (now known as Christianity) introduced quite a different view of abortion: a view that amazed their pagan neighbors. As Michael J. Gorman points out in his excellent piece, Abortion and the Early Church the Didache (lit. “Teaching”), which is also referred to as The Teaching of the Twelve Apostles and the Epistle of Barnabas  were written in the first century. These give us insight into the beliefs and practices of the early Christians:

Both texts regard abortion as murder and provide an ethical context within which abortion should be viewed. “Thou shalt not abort” becomes a sub-commandment of the commandment not to murder. It has a status almost on a par with the Decalogue itself. Use of the commandment form provides a succinct continuation of the Jewish condemnation of deliberate abortion. There is no formed/unformed distinction, no elaboration. Abortion is presented also as an offense against humanity, a defiance of the second great commandment-“Love thy neighbor”-which the Epistle of Barnabas has expanded to say, “more than thyself.” Furthermore, abortion is depicted not only as a sin like sexual immorality, but as an evil no less severe and social in scope than oppression of the poor and needy and no less dishonorable than the use of poisons.

The Didache and the Epistle of Barnabas were: extremely important in two other respects. First, the widespread use of their “Two Ways” teachings among early Christians assured the disseminating of their position on abortion. Second, later writings appropriated the murder definition, the commandment form, the elevation of the status of the fetus, and the context of personal and social evils found in these two early works.2Abortion and the Early Church, Michael J. Gorman

So, to the early Christians, killing the preborn was tantamount to killing their neighbor! Athenagoras continued the challenge to the Roman Emperors and culture in the mid-second century:

Athenagoras’s contribution is to set the issue of abortion in an argument for Christian practice based on the Christian view of the sanctity of life. He writes that Christians have renounced murder in all its forms, mentioning the common Roman practices of gladiator contests, animal fights, exposure, and abortion-in order to avoid becoming polluted and defiled. It is this absolute abhorrence of bloodshed in any form which drives them away from even looking at practices such as gladiator fights and criminal executions. This view stood in stark contrast to the prevailing Roman lifestyle.3Abortion and the Early Church, Michael J. Gorman

(For a fairly good overview of the position of Christians on this issue for the first three and a half centuries, Abortion and the Early Church, Michael J. Gorman is a worthwhile read.)

Since the number of Americans calling themselves Christian is still fairly high, so how has killing one’s most helpless of neighbors become an accepted practice in our day? Simply put, the onslaught of pagan ideas – along with a meteoric rise of self-centeredness – has made abortion amoral again; simply a matter of personal choice. People are primarily looking out for number one. But even more malevolent perhaps, how has the Christian belief that “life is sacred” been turned on its head so that now, to many, “killing is sacred?” We would suggest that logically follows the shift from a Christian worldview to the same or very similar pagan worldview held by first century Romans. So, the “sacred work” of abortion is a reflection of paganism’s ideas of the sacred. Christianity’s sacred work is very different and follows the words of Jesus in Matthew 19:14:

…but Jesus said, “Let the little children come to me and do not hinder them, for to such belongs the kingdom of heaven