Is Abortion “Sacred Work”?
Can I Know God Personally? 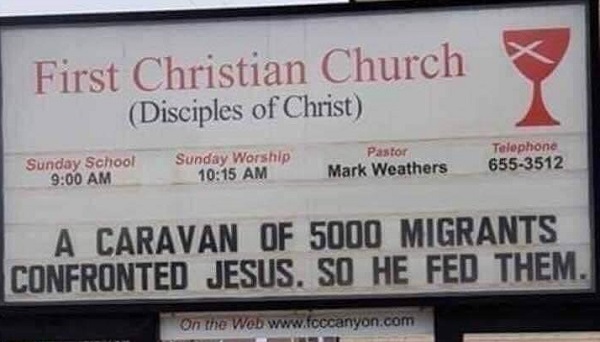 Earlier this week someone posted a meme of a church marquee with the message, “A Caravan of 5000 Migrants Confronted Jesus. So, He Fed Them.” This reminds us of the assertion made by many that Mary, Joseph, and Jesus were “homeless.” No, they were never homeless. They had to leave their home and travel to Bethlehem due to a government decree by Caesar Augustus that required everyone to be registered in their home town. They did not have a second home in Bethlehem, so they were required to find lodging for their stay. The rooms at the local inn were full, because of all the other people in town to register. The only accommodations the inn keeper had left was a lowly stable. They had no choice but to take it because Mary was about to give birth. They were not homeless, and the text does not indicate that they were without financial resources. So, who buys into these lame-O arguments? Only people who do not know the Bible.

Perhaps one of the biggest issues we at MCOI find ourselves dealing with is disdain for and abuse of the Word of God by so many in our society. So often today, people attempt to buttress their arguments by taking Bible passages out of their historical/grammatical context and applying the newly twisted Scripture to their dubious ideas. In this case we are looking at the feeding of the 5000, which occurs in all four Gospel accounts. (The only other miracle recorded in all four Gospels is the resurrection.) By reading the accounts in Matthew 14:13-21; Mark 6:31-44; Luke 9:12-17; John 6:1-14 we find that:

2) They weren’t “migrants” but were Jews: Many were citizens of the Nation of Israel; others were Jews on pilgrimage to celebrate the Passover (John 6:4) in their ancestral home, Israel. The crowds also came from surrounding towns to see and hear the popular new rabbi “But when the crowds heard it, they followed him on foot from the towns.” (Matthew 14:13 ESV).

3) Since it was late and the people were some distance from their homes in “a remote place,” Jesus decided to feed them rather than sending them away to buy food. (Matthew 14:16-17)

4) What was the purpose of the miracle? Was it primarily about feeding the poor, or giving aid to a group of people leaving their own nation in search of better job opportunities? Truth be told, the miracle was not about feeding the people at all. There is a very Jewish context here. These Jewish citizens of the Nation of Israel were looking for the Messiah Whom their Scriptures had predicted would come to them. Their Hebrew Scriptures, what we call the Old Testament, said that their Messiah would be identifiable by His performance of some particular “signs” – or miracles. We even see that at the end of the account in the text of John 6:14:

“When the people saw the sign that he had done, they said, ‘This is indeed the Prophet who is to come into the world!’”

How did the Jews conclude this miracle was a sign? Again, it is a contextual question. The Jews were regularly taught from the Hebrew Scriptures. They had read about this miracle before by a prophet named Elisha.

A man came from Baal-shalishah, bringing the man of God bread of the firstfruits, twenty loaves of barley and fresh ears of grain in his sack. And Elisha said, “Give to the men, that they may eat.” But his servant said, “How can I set this before a hundred men?” So, he repeated, “Give them to the men, that they may eat, for thus says the Lord, ‘They shall eat and have some left.’” So, he set it before them. And they ate and had some left, according to the word of the Lord. (2 Kings 4:42-44 ESV)

The story here is like most of the miracle stories in the Gospels. The recorded miracles were to demonstrate Who Jesus is! The signs were for identification purposes. Anyone could come along and claim to be the promised Messiah. The real Messiah had to be able to perform the miraculous signs in the sight of the people. We even see the importance of the signs in the way Jesus responded to John the Baptist while John was imprisoned.

Now when John heard in prison about the deeds of the Christ, he sent word by his disciples and said to him, “Are you the one who is to come, or shall we look for another?” (Matthew 11:2-3 ESV)

The response from Jesus is instructive. He could have simply said, “Yes, I am,” but He didn’t. Instead, He pointed to the miracles He was performing, proving that He was the very Messiah who had been prophesied to come:

And Jesus answered them, “Go and tell John what you hear and see: the blind receive their sight and the lame walk, lepers are cleansed and the deaf hear, and the dead are raised up, and the poor have good news preached to them. (Matthew 11:4-5 ESV)

Again, with the signs! Jesus was pointing to the specific identifying signs which John and any self-respecting Jew in His day would understand. Isaiah 35:1-10, of which verse 5-6 reads:

Then the eyes of the blind shall be opened, and the ears of the deaf unstopped; then shall the lame man leap like a deer, and the tongue of the mute sing for joy. (Isaiah 35:5-6 ESV)

Jesus sent the message back to John that He was fulfilling the signs prophesied and outlined in Isaiah 35! But in order for us to know that, we would have to read God’s Word in context, not cherry pick various texts to lend “spiritual” credibility to 21st century causes.

Cults and false religions like Jehovah’s Witnesses, Mormons and Islam employ textual abuse to the max. Sadly, many popular TV and/or “celebrity preachers” engage in the same Scripture-twisting practice. We have in the past demonstrated how Rick Warren engages in scripture twisting in our 2004 MCOI Journal article, The Purpose Driven Claim. Others, like Bill Gothard (Institute in Basic Life Principles), Gwen Shamblin (Weigh Down Workshop/Remnant Fellowship) or Xandre Strydom (Christ in Me International in South Africa), haven’t met a Bible passage they couldn’t twist out of context in an attempt to claim their egregious teaching are endorsed by God in the Bible.

There is a simple way to test for textual integrity among those who claim scriptural authority for their teachings. You might say it’s a “text test.” (See if you can say that 15 times fast!) We must carefully examine the text in question to see if their use of it has integrity, while keeping in mind that a text without a context is a pretext:

– is a Pretext (a pretext is something that may “sound” true but is actually false).

Remember: Just because we see a pithy statement it on a church marquee, or on a so-called “Christian TV,” or perhaps coming from a political partisan – that does not mean we can assume it is true! We need to test that text with the text test.

© 2019, Midwest Christian Outreach, Inc All rights reserved. Excerpts and links may be used if full and clear credit is given with specific direction to the original content

Is Abortion “Sacred Work”?
Can I Know God Personally?