A Very Muslim Christmas
The World Will Live as One 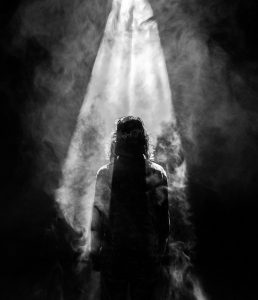 Have you ever noticed how many people believe in a one-dimensional “cardboard Christ”? We may not think about it in those terms, but it surfaces in various ways. At this time of year, the babe in the manger is certainly the predominant Christ. Everyone likes sweet, cuddly babies with their cute cherub faces. Unfortunately, that is all many acknowledge about Jesus – that He was born in a manger 2,000 years ago – and that baby
Jesus has no affect or influence on their day to day lives throughout the year.

There is also the Jesus of progressives, or as Allie calls them, “Social Justice Warriors.” Their Jesus is all about peace and love. He is an example of kindness and inclusion. He is definitely not about judging people, and would not be in favor of mentioning, you know, the S–word (sin), because that wouldn’t be kind or inclusive. Is this Jesus the Son of God? Maybe, but that isn’t an important part of the one-dimensional Jesus they have in view. It is true that the real Jesus spoke about having love for one another and caring for the needy. Yet, somehow the SJW Jesus advocates serving and protecting others through governmental agencies – rather than the personal voluntary sacrifice of time and money that has led Christians for centuries to start hospitals, adoption agencies, rescue missions, orphanages, feeding programs and the like.

This Jesus is not big on people taking any personal responsibility for their lives, and it is no matter if the people seeking help should thumb their noses at such laws as they attempt to force others to care for them. For example, immigration laws are certainly not inclusive, and, therefore, by definition are definitely unkind, so they have to go! This Jesus would certainly not expect that the Gospel be preached to those who have never heard or understood – the neediest of all human beings – and, of course, would never offend the sensibilities of people by calling them to personal change or holy living. Our duty to this Jesus can be completely satisfied by voting for the right people, and perhaps by protesting whatever people or laws they find hindering the doing away with the rule of law and installing the fairlyland world they dream of. This Jesus does not call for disciples, but “activists.” All we need is love, though naivete is a plus.

Others worship the Jesus of railing hatred and condemnation. Their Jesus  simply hates wrongdoers, which should make one wonder why He died for sinners. Westboro Baptist Church exemplifies this version of Christ, and they arrive at various events with their signs and “preaching” that “God hates fags” etc. What they feel they do not need is love. Rabid self-righteousness is a plus here.

Is Jesus God? Yes! Does God hate sin? Absolutely! So, what’s the problem with the God-hates-you approach? God hates sin, but He loves sinners, and offers them grace and forgiveness. That is the whole point of the cross.

There are of course many other one-dimensional Christs, such as the Alien Jesus, the Hindu Jesus (Who is not “the Way” but “a way-shower”) the “My Buddy” Jesus, etc. But the REAL Jesus, Who entered our world 2,000 years ago, is so much more than a sweet baby, an incarnation of Vishnu, a Jungian archetype, a leftist activist, a buddy-buddy, or a hater of sin.  The REAL Jesus is the One Who arrived in Bethlehem not simply as another human being but as God Who took on human nature.

That truth brings us into the Advent season. (The word Advent means, “The coming or arrival of something or someone that is important or worthy of note.”) Jesus is the Creator of all things Who chose to incarnate and live among His creation. He is the One Who spoke in the Hebrew Scriptures to delineate and define sin. Because we were and are incapable of living the holy life that is required to be reconciled to God, Jesus, because He loves us so much, arrived to perfectly live out the Law that condemns us and to pay our debt to God on the cross. While He walked the paths in Israel and Samaria, He spoke of peace and love, but He also spoke of sin and condemnation. Not only did He expose the hypocrisy of the religious leaders who brought to Him for condemnation the woman caught in adultery, but He was the one Who told her to “go and sin no more.” The religious leaders hated Him because He regularly exposed them as sinners in need of salvation, and as people who were themselves rushing towards judgment because of their refusal to believe.believe.

The beautiful thing is that because of what Jesus did for us on the cross, no one must any longer live in fear of judgment and condemnation. Forgiveness and the resulting peace with God are a free gift to those who believe, no matter what they have done! But the gift must be accepted, at which time one is placed into Christ Jesus, so that when God looks at him or her, He sees His Son in all His radiant righteousness.

There is therefore now no condemnation for those who are in Christ Jesus. (Roman 8:1)

Sadly enough, if a person refuses God’s gift, he or she is not in Christ, and when God looks at that person, He sees them in all their pitiful foulness. You’re either in – or out.

There is far more to Jesus than peace, love, kindness, inclusion – or condemnation, though all of these are true. His is the true story of the Prince and the Pauper – He is both. He is God the Son Who in the First Advent incarnated as a servant and gave His life, a ransom for many. He raised Himself and returned to His throne in heaven. What is rarely discussed even in many churches today, is the Second Advent, when He will return to earth to rule and to judge those who have rejected the salvation He freely offers. (John 5:22 & 27, Revelation 19:11-16)

Where most seasonal songs and hymns focus on the birth and celebration of the coming of the Savior, which are wonderful in their own way, one we appreciate gives us in a mere 229 words the story of the two advents, redemption, God’s communication and Jesus as King.

In The First Light

As his mother held him closely it was hard to understand
That her baby, not yet speaking, was the word of God to man
He would tell them of his kingdom but their hearts would not believe
They would hate him and in anger they would nail him to a tree

But the sadness would be broken as the song of life arose
And the firstborn of creation would ascend and take his throne
He had left it to redeem us but before his life began
He knew he’d come back, not as a baby, but as the Lord of every man

Even so, come Lord JesusΩ

A Very Muslim Christmas
The World Will Live as One