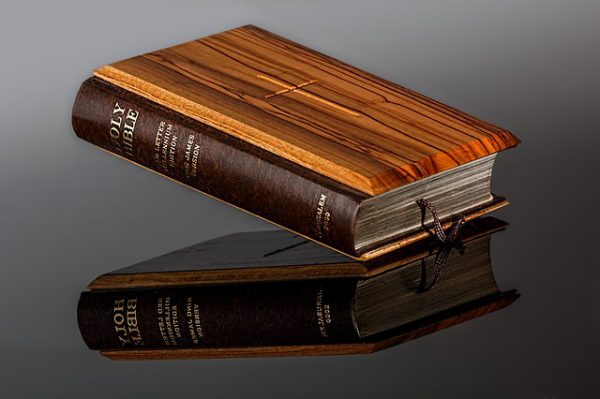 Some years ago, Bob Anderson of Watchman Fellowship and Erich Grieshaber -former JW and now evangelist – did a short skit called “The Custom Bible Company” at one of the annual Witnesses Now for Jesus Conventions. Although it was a spur of the moment skit that was made up on the fly, it was a great satirical look at how Jehovah’s Witnesses and other cults twist the Scripture to back up their doctrine. The gist
of the skit was simple. A Custom Bible Company rep meets with a potential Arian client who doesn’t like the idea that Jesus is God. The Custom Bible Company rep responds by assuring the customer that their custom bibles will say exactly what the customer wants them to say. Who or what would you like Jesus to be? An angel, perhaps? No problem! We can make Jesus an angel – perhaps an archangel! Yeah! Michael the archangel!

We will now proceed to “customize” the skit to suit our blog post.

The potential client likes that change, but it turns out he has some other major problems with scripture as well. Can the Custom Bible Company remove Hell from the scripture? Oh, yes! “Hell removal” is very popular these days – one of our specialties! We can take that right out. But sir, you must tell us what you want us to do with the souls of people who have died? The client thinks for a moment and then in a flash of brilliance suggests zapping the dead right out of existence! Way cool, sir! “No soul” and “no hell” go together like peanut butter and jelly, right? Certainly sir! This is your custom Bible. You or your successors can always later make up some cockamamie drivel about how Jehovah can recreate a copy of their body later if he chooses and stick a copy of their “personality pattern” (whatever that means – and no JW will know, exactly) into the clone!

But sir, might not Jesus’ resurrection need to be edited as well? The client, none other than JW founder Charles Taze Russell, believes that actual bodily resurrections are impossible – and wonders if they couldn’t just evaporate the body into gasses (or something) to explain away the empty tomb? Sure! Anything you like, Chuck! Great! And, says Russell, I believe that Jehovah – that trickster – deceived the disciples by manufacturing temporary bodies complete with “crucifixion wounds” just to make them believe that Jesus’ body had been resurrected. No problem, Charlie! Sounds plausible…And, as an added bonus, should you change your ideas over the years, we’ll be right there to edit your custom bible to keep up with your changing doctrines! It’ll be kind of a “New Light” bible. Bibles that can’t be “edited” can become such an embarrassment over time!  Once you’re teaching something new, you don’t want some apostate pointing out that it is the exact opposite of what you taught before. Bibles must be able to be keep in perfect step with new doctrine!

The Rep mentioned that one of their earlier clients, Joseph Smith Jr., liked the idea of Jesus being god, but he really wanted to be god also. And of course, the Custom Bible Company was very accommodating to his views also – Jesus was a man who became a god and all of Joe Smith’s followers can now do the same! And we fixed things to allow for millions of gods, all ruling over their own personal planets, with their (must be perpetually pregnant) wives and spirit children! After all, this is the Custom Bible Company. No doctrine is so ridiculous that we can’t make it seem plausible!

The Custom Bible Company took good care of Charlie and Joe, but sad to say, this type of bible tampering is happening today in what once passed as Evangelical churches. One of the newer bibles that is gaining in popularity is The Mirror Bible by François Du Toit. Our friend, Pastor G. Richard Fisher, spent some time watching François Du Toit on video where he learned Du Toit was kicked out of theology school, doesn’t really like doctrine, talks a great deal about our “I Am-ness” and seems to lean toward Universalism. This “bible” isn’t a translation but, as the description on Amazon points out, is “a paraphrase from the original Greek text.” A paraphrase simply reflects the author’s beliefs about a passage. What does François Du Toit’s custom Bible teach? According to his video promo, The Gospel In 3 Minutes it is “Your Image, Your likeness, Your total freedom, Your reflection, Jesus Christ Your mirror reflection.” It is all about you! “Jesus did not come as an example for humanity but as an example of who we are.” In the entire 3 minutes he never mentions sin, the need for forgiveness or a Savior. For those who want a custom Bible which offers them a warm and fuzzy God that exists merely as a reflection of them, this is the one for you. The fact that Du Toit’s ideas are false and leads one away from belief in the true God, has never prevented a custom Bible company wannabe from printing such works.

He says: “he breathed on me so that I would do the project, and I felt downloads coming, instantly. I received downloads. It was like, I got a chip put inside of me. I got a connection inside of me to hear him better, to understand the scriptures better and hopefully to translate.”

On this same TV program, Simmons claimed Jesus revealed to him a new chapter of the Bible. This happened when he was translated to the library of heaven where he saw more books than you can imagine. One stood out called John 22. It told about the greatest revival the world is yet to see. God promised Simmons that one day He’ll bring Simmons back to heaven and give him this book.

Alisa Childers points out in Here’s Why Christians Should Be Concerned About The Passion Translation of the Bible:

…the sole translator of TPT, Brian Simmons, is not trained in the biblical languages, and lacks the credentials necessary to produce an accurate translation of the Bible.

Another thing that sets TPT apart from these other single-author translations is that Simmons claims that Jesus visited him personally, took him to the library of heaven, and asked him to write the translation. He claims to have received “downloads,” and “secrets of the Hebrew language” from Jesus Himself. Simmons even admitted that he has minimal background in biblical languages and needed the Lord’s help to translate.

That is the advantage of producing a custom Bible. You don’t need to be bothered with such mundane things as knowing the original languages, and in fact, knowing the original languages would almost certainly be an impediment to your imagination, or whatever entity is downloading information to your mind. It frees you up to add new bible chapters – or at least teach others that there are unrevealed chapters which will be added as an update later. Who can deny your experience? Who can argue with your own custom Bible?  It’s a very convenient new tool to let NAR Apostles and prophets off the hook for being false prophets by simply rewording the warning Jesus gave in Matthew 7:15 and following:

Constantly be on your guard against phony prophets. They come disguised as lambs, appearing to be genuine, but on the inside, they are like wild, ravenous wolves! You can spot them by their actions, for the fruits of their character will be obvious. (TPB)

The passage in the real bible is actually a warning to be on guard for FALSE PROPHETS – which of course the NAR prophets are! The definitions of false prophets are given by Moses in Deuteronomy 13 and 18. The hearers of Jesus’ warning would have had these passages memorized. The warning has nothing to do with the so-called “fruits of one’s character.” One cannot judge a false prophet by his ungodly or bad “character,” since, as Jesus points out, they will look just like sheep!! Sheep are true believers. These false prophets would seem outwardly like Godly men, doing good works while hiding their true characters! The false prophets that Jesus warned would come would probably be carrying Bibles, claiming to do miracles, utilizing Christian lingo, acting nice and Christian-y, and maybe even casting out demons in Jesus’ name. In fact, that is what Jesus said in 7:22-23:

The “fruit” of a false prophet are their false prophecies and false teachings – not their outward behavior, large followings or “mighty works.” False teachings and false prophecies can only be identified by utilizing a genuine bible – one that does not change with the times or fads or one’s own ideas. Conveniently though, with a custom Bible, one can get rid of the criteria God gave to His people to check out false prophets, false teachers, and “workers of lawlessness,” and make one’s own wackadoodle ideas the standard of truth. It is so much easier than studying the Bible in its historical/grammatical context, which can be so labor intensive and boring, and which judges our ideas by the revealed and unchanging truth of the Creator of all instead of the other way around.

Now that we think of it, perhaps The Custom Bible Company could benefit by developing a new fully editable Bible app. That way, when you want to change or eliminate doctrine you don’t like, you can just highlight and hit the “Begone” button. And if, down the road, you feel the need to update, say, your moral code, to keep up with a fast-changing culture in a downward spiral, just a few clicks will help you remain relevant and popular, while the “Begone” button will hide all trace of your regrettable and embarrassing former beliefs. And perhaps best of all, the old and unevolved God of the old unevolved bible will not mind at all, because He is, after all, just a reflection of you – your mirror in fact. So, have it your way – and good luck with all that on judgment day.Ω