Grace Is Amazing
Leaning Toward Heresy 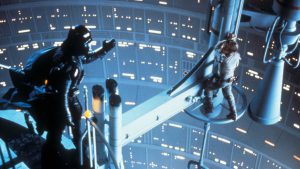 Spoiler Warning: This post contains the most minor of spoilers for Avengers: Infinity War and one whopper of a spoiler for the Empire Strikes Back.

Some of you are old enough to remember seeing Empire Strikes Back at the theatre. That movie is of course the best of the entire Star Wars series and I will have words with anyone who disagrees. 🙂 Just words though. I may be skinny but I’m weak. What made that movie so groundbreaking is that it ended with the bad guys really triumphing over the good guys. The Rebellion in jeopardy and its greatest champion minus one hand. I left the theatre stunned. The bad guys won. Sure, Luke got away but he’s devastated cause Darth Vader is his father. Worst family reunion ever.

But it was really only intermission,. I told myself over and over again. It was the first time I had experienced the power of a story to grasp my imagination. The first time I was in the grip of tension that a good story can bring. When the title of Star Wars Episode VI was announced as Return of the Jedi, I was so excited. By the end of the film I was elated. The good guys won! Luke redeemed his father!

Later I learned  that George Lucas borrowed his ideas of the force from Eastern Mysticism. Later I learned all the new age influences. The next time I read a star wars comic I did so with my eyes wide open. But what never left me was that sense of suspense at the end of Empire Strikes Back. Hope had been dashed. Han Solo was in carbonite. Good hung on by a thread. But it wasn’t the final act.

But it was not the final act. I had the same sort of reaction when I came out of the theater from seeing Avengers: Infinity War. Let’s just say it ends on a cliff hanger of sorts. 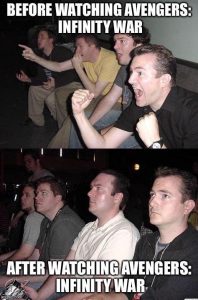 I found myself saying the same thing I did way back when I saw Empire Strikes Back. It’s not the final act. When people asked me what I thought of the movie, my response was, “I’ll let you know when its finished. We are only at intermission after all.”

If Christianity wasn’t backed up by a ton of evidence, I would still be tempted to believe it because of the story. The Old Testament reads like the end of a first act. God gives Israel a quest but Israel fails because of its own sin. What does God do when the hero sort of becomes a villain. George Lucas was dipping into a deep well when he corrupted Anakin Skywalker.

Then Jesus comes on the scene. He looks like he has what it takes to finally fulfill the mission. Then plot twist, he reveals that the only way to win is for him to die. (Bigger plot twist, God knew this all along and left clues everywhere in the first act.) Then the unthinkable happens. The good guy gets killed. His followers scatter. His movement is poised to go the way of all the other would be messiahs. But its not the final act.

What’s clear is that when Jesus rose from the dead, his followers thought we had entered the final act. They kept talking about a “new creation” which was code in the first act for the final kingdom of God. Then to prove it they broke from thousands of years of Jewish tradition and worshipped the same God as the Jews but on the first day of the week–the day God began his creation of the world.

When I watch movies with my son I always ask him if he knows when the movie enters its final act. In a good story, it is always when the main character makes a choice that inevitably leads us to the ending. The ending is set because of the choice that is made. This happens in Return of the Jedi when Luke determines to redeem his father or die trying. It happens at the end of Infinity War even though we’ve got a whole two hour plus movie to go. It takes faith to wait for the resolution of the evil and their may be other sacrifices but the end is already set. This is what Paul means when he says in Colossians

He has delivered us from the domain of darkness and transferred us to the kingdom of his beloved Son, in whom we have redemption, the forgiveness of sins.(Col. 1:13)

Notice the past tense. He has delivered us. All that is left is the resolution. We are already in the final act. However long it lasts, the final act has begun because the choice has already been made.

And what a glorious resolution it will be:

Beloved, we are God’s children now, and what we will be has not yet appeared; but we know that when he appears[ we shall be like him, because we shall see him as he is. (1 John 3:2)

And those who are wise shall shine like the brightness of the sky above;[ and those who turn many to righteousness, like the stars forever and ever. (Daniel 12:3)

Way better than any Hollywood ending. Even a Disney one.Ω

Grace Is Amazing
Leaning Toward Heresy