RINO: Resurrection in Name Only

That Other Flag
Sacrificial Love 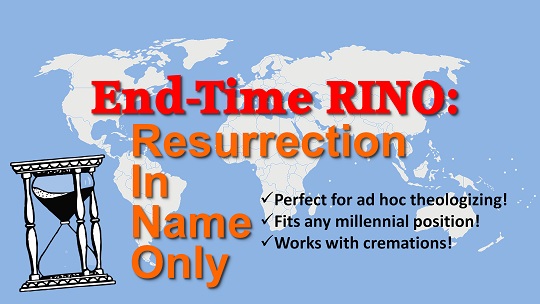 Most of us will celebrate the resurrection of our Lord this Sunday. For many, the significance of the celebration gets lost in the now predominant popular “add-ons,” such as Easter eggs, bunny rabbits, and the like. The awe and wonder of the historical event and its centrality to the gospel has been downgraded, and all too often, discarded by the mainstream culture. Sure, there is a general nod to the reason for the day, but how many people, even in the churches, understand how essential the resurrection is to their faith?

There are a number of different views on the resurrection, and  in one of our early webcasts, Dr. Geisler, Ron Henzel and I discussed some of them.

A lack of sound teaching on this essential doctrine leaves even many church goers open to being deceived to the point that they actually deny the resurrection, sometimes overtly and sometimes through redefinition of terms.

One view involves simple denial of the historicity of the resurrection. Bart Ehrman, The Jesus Seminar, and others just assert that it never happened. These darlings of the liberal media portray the resurrection story as simply an aspect of the Jesus myth, which they paint as having developed in the late first and early second century. We address this claim in a Journal article from 2013, “Interrupting Ehrman: Are There Biblical Contradictions?” These claims are fairly straightforward, and it is relatively easy to debunk them by showing what the early church believed. The Gospel of Mark alone records Jesus predicting His resurrection seven times! Resurrection denial is nothing unique to our times, of course. The early Church Fathers wrote extensively refuting “denial” claims, but, as is so often the case, these false teachings recycle on a regular basis. Today “resurrection denial” gets much approving play on TV and other media, making it a very prevalent view in our modern culture. By now we should all recognize that Christians are NOT immune from cultural influences. Every generation of Christians has to vigorously refight the same old “denial” battles as false teachings rear their ugly heads.

More difficult to refute are the views which become denials through redefinition. While claiming to believe in the resurrection, subtle changes in the teaching are made and pertinent terms are redefined, resulting in outright heresy. What ends up being taught and believed is Resurrection in Name Only, and such teachings bear little resemblance to the truth of the resurrection.

Jehovah’s Witnesses are creative regarding the resurrection. Their fundamental premise is that humans do not have a soul/spirt that survives death. Therefore, death in their view is annihilation. Non-existence. I spoke with a Christian not long ago who is dialoging with a JW, and she has (understandably) become quite confused. She asked “If Jesus is God, when He died, did God die?” So, I had to begin by explaining that “death” means separation, not annihilation. Paul writes in Ephesians 2:1

And you were dead in the trespasses and sins.

Obviously all of us, in our non-regenerate state, were still walking around, working a job, dating, perhaps marrying but were “dead in the trespasses and sins.” We were separated from God. In the same way, when you “die” in this life, your spirit is separated from your physical body, but your spirit continues existing. Jesus alludes to this in John 2:19-22 when he said that He would raise his body. Having been killed, He still had to exist somewhere in order to raise Himself from the dead, although He was separated from His body.

The Jehovah’s Witnesses deny this Scriptural definition. Instead they teach that all there is to “you” is contained in your physical body and when you die, the original “you” is annihilated and as such is, as they put it, “dead forever dead.” God then creates a new physical body, a clone, if you will, of your former self. He then creates a copy of a copy of “your” memories, which He has stored for this purpose, and places it into the clone creature, and animates the new “you” with something they liken to electricity which they call a “life force.” Voila – a whole new “you!” This redefinition is a recreation, not a resurrection. A JW’s hope is not to be resurrected but merely copied. We have written extensively on this in “The Resurrection: Watchtower-Style”

To give a short refutation: If God is going to make a copy of you after death, He could of course do so right now. If He did create a copy, and placed all of your memories into it, and set it down in front of you, right now, would you be willing to go out of existence and let this clone go home to your wife – or husband – and kids? Of course not! Because, looked at it in this stark way, you know full well that the new copy creature is not you! “You” will no longer exist! The copy, however nice, never gave birth to your children, never married your spouse, never loved your mother, or lovingly cared for your family, never went door to door for Jehovah, and yet reaps all your rewards! Does this scheme sound good to you?

Others within the churches, Bible colleges, and seminaries claim to believe in the resurrection, but redefine it in other ways which end up being just another denial of the resurrection. We first came to realize this in 1990. Murray J. Harris in his book, From Grave to Glory, argued that Jesus was raised bodily but not physically. His physical body was not integral to his resurrection body and was, according to Harris, invisible and non-corporeal in its normal state. Jesus, he claimed, merely manufactured bodies for the eyes of the disciples for evidential reasons, to convince the disciples that He had been raised. In his view, the body, which Jesus stated He would raise up, wasn’t really raised at all. Instead Jesus chose to deceive the disciples by manufacturing bodies with manufactured scars. The “resurrection” was a scam! This is pure boloney (or bologna, if you prefer). There is no real difference between this view and what the Watchtower teaches, except that Harris is in a position to influence the many pastors who learned from Harris and his books, and, who in turn, teach the heresy to their congregations. I was at an event in 1991, working with others to bring this to the attention of the church, and perhaps 50% of the pastors that came by our booth asked the same question, “How do you know the resurrection was physical?” Being a bit snarky by nature, I had to respond by asking, “Have you read the Bible?”

Not only was Jesus fully human (and fully God) while on earth, he is still fully human in heaven:

According to Paul in 1 Corinthians 15:17, if Christ has not been raised, we are still in our sins, and Christianity is a lie. This is one of those non-negotiable doctrines. It is an essential of the faith and without it there is no gospel, no salvation, no heaven above being preparing to receive us. Happily, however, Christ did rise from the dead, His body was not found in the tomb, and He appeared to many witnesses, proving He was physical by displaying His wounds and by eating physical food.

That Other Flag
Sacrificial Love