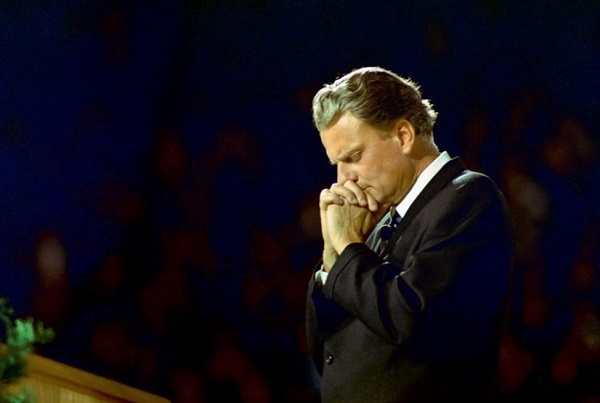 As all of you know, a great man has died. From what I know of him, I think that is the strongest compliment he would allow. Call him a saint and he would remind you that all God’s children are saints. Call him a hero and he would, no doubt,  remind you that all he did was speak what was given to him. Call him the closest thing to the Pope for evangelicals and I like to think he would laugh, shake his head,  and slip into a discussion about the gospel which came so easily to him.

I think Billy Graham would cringe at all the attention. Deflect it with that Carolina drawl. His armor against inflated pride was, from what I can gather from interviews, a healthy sort of rehearsal of his own shortcomings. Shortcomings I’m sure many would be happy to list. Because criticism is so much easier.

But it is difficult to find things to criticize Graham over. And for every shortcoming, a new realization shows you just how courageous the man was. Yes he belonged to an all-white country club, but he integrated his crusades when everyone told him it would be a disaster. Yes he was a used by the Soviet propaganda machine but he would have considered, the small piece of his pride and reputation a bargain for the chance to preach behind the iron curtain. Yes he failed to stand up against racism and antisemitism when Nixon railed about Jews. And yet, every president from both sides of the ailse sought him out. After Nixon he never again let politics get in the way of the Gospel.

I can share with you only one story of Billy Graham. But it is my story so it will be different. In 1996 I had just started seminary at Southern Evangelical Seminary in Charlotte. The Grahams were ever a presence on SES campus. A member of Billy’s extended family sat on the board and was a big donor. Ross Rhoades started SES with Norm Geisler at Calvary Chapel before he left to work with the Billy Graham Evangelistic Association and Samaritan’s purse. So as you can imagine, SES was involved with the 96 Charlotte Crusade. I volunteered to be on the front lines. I was a “counselor” down front on Youth Night (I chose that night because hey I was still young and I wanted to hear dcTalk and Michael W. Smith.) and lead others to Christ of course.

As I recall training was 3 or 4 sessions to orient us to how things would be that night. I remember seeing every sort of Christian possible crammed into that room to go through the training. It was 22 years ago but I remember what we were told was to present the Gospel clearly and simply. I recall no discussion about theological differences. Any Christian clergyman (or specially invited Seminary Student) was welcome to serve in the Crusade but there was no deviation from the BGEA script for counseling. I remember looking around the room at all the clerical collars and even a nun’s habit and wondering “Is this really going to work?”

It did. At least what I saw of it. I had front row seats for dcTalk, Charlie Daniels, and Michael W. Smith. I was 22 and I was at the exact center of everything. Oh and I get to share the gospel. Yeah, don’t forget that. Right. It was all spectacle and surrounded by a packed Carolina Panther stadium. 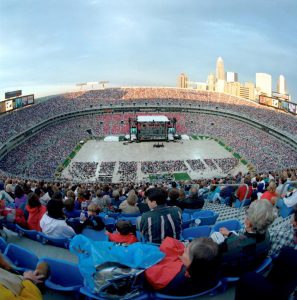 That’s me way down by the stage. I’m wearing a hat. 🙂 (Photo from the Billy Graham library.)

Billy Graham came out. I remember thinking, “He’s so frail.” To me Billy Graham had always been old. He looked hunched and pale. I was shocked. But then he began to speak, and I watched the years fall off him. To this day, it was like I watched a person come alive. His gravelly voice held iron in it. His eyes sparkled. He spoke for such a short time. Reached out to the youth by quoting lines from a Smashing Pumpkins song to hold up a mirror so that they could see their own angst “Despite all my rage I am still just a rat in a cage.” And then he offered them a way out.

Yes it was theologically simplistic. I could imagine a hundred cynical replies to his cultural diagnosis if I were anti-Christian but it worked. I saw kids come to Christ. I know some people have said Billy Graham altar calls are two-thirds emotion and one third sincere repentance. Even now I cringe at my naivete but there was genuine acceptance of Christ down there at the stage. I didn’t get to talk to too many people. I remember leading a few people in prayer and filling out the BGEA card for follow up. We had more counselors than we needed but I found myself just walking from one huddle of crying, praying teenagers to another listening. And I would look up every now and then onto the stage to see Graham now frail and pale once again sitting on the stool the brought him so he could rest. White hair blowing in the Charlotte night air. Looking at crowd and occasionally reminding every one that they could still come.

When I heard he died, my wife asked me if I was alright. I wasn’t. Whatever Billy’s faults, he spoke the Gospel freely, simply, and passionately and he compromised his faith far less than I have. The Swirling Eddies wrote a simple song once and when I heard Billy died, I played it over and over.