Under The Influence: How Christianity Transformed Civilization 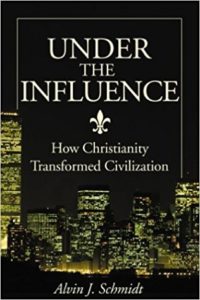 Retired (1999) Illinois College Professor of Sociology Dr. Alvin J. Schmidt, who holds an M. Div. from Concordia Seminary and a Ph.D. from the University of Nebraska, has written what should be considered one of the most important books of the twenty-ﬁrst century.

In a popular culture that seems determined to persecute Christians and to remove every symbol of Christianity’s inﬂuence from American life, it is refreshing to read a book that so convincingly describes how the followers of Christ gave Western Civilization its ideas of political and religious freedom, respect for human life, and much, much more.

In his book Under The Inﬂuence 1Alvin J. Schmidt, Under the Inﬂuence: How Christianity Transformed Civilization, (Grand Rapids, MI: Zondervan, 2001), p13; All page references contained within parentheses are to this publication. Schmidt lays out the historical evidence in great detail showing that Christians throughout history have taken key leadership roles in protecting infants from abortion; giving women freedom from oppression; setting up hospitals and charities to care for the poor and ill; creating many of the great colleges and universities; developing the free-market economy; promoting science, music, and the arts; and far more.

In his “Introduction” Dr. Schmidt observes:

Many today who disparage Christianity may not know or believe that, were it not for Christianity, they would not have the freedom that they presently enjoy. The very freedom of speech and expression that ironically permits them to castigate Christian values is largely a by-product of Christianity’s inﬂuences that have been incorporated into the social fabric of the Western world… (p.13)

Christianity’s inﬂuence on the sanctity of life was evident immediately in the ﬁrst-century Church. Dr. Schmidt explains how the pagan cultures of both the Greeks and Romans placed little value on human life, and even the great Roman philosopher and politician Cicero justiﬁed infanticide for deformed infants.

Christians, however, knew that Christ valued all human life—especially the most vulnerable—and began rescuing infants who had been tossed in the woods to die. Christian families adopted these discarded children and raised them to love the Lord. Christian writers consistently condemned both abortion and infanticide, but they had little power under pagan rulers.

Eventually, the Christian Roman Emperor Valentinian outlawed infanticide in A.D. 374 and criminalized the abandonment of children as well.

It was also the Christian view of the sanctity of human life that eventually brought an end to the gladiator contests in Rome. Christians organized boycotts against the games, and church leaders condemned the wanton taking of human life as entertainment. The games were eventually eliminated by two Christian emperors.

Today’s culture war pits traditionalists against a paganized popular culture who seek to undermine all morality and to usher in total sexual liberation from all notions of decency or morality. Leading this effort are the militant homosexuals who are not only working to undermine marriage, but also to throw off laws that restrain sexual hedonism.

This current situation mirrors what was occurring in pagan Rome and Greece as Christians were beginning to inﬂuence their culture during the early centuries of the Church.

Dr. Schmidt notes that Roman culture promoted depraved relationships between men and women, men and men, and men with boys until Christians began making a difference. Roman author Ovid, for example, described how relationships between men and women were becoming sadistic and masochistic. The Emperor Tiberius used to have male and female prostitutes engage in public sex acts for his entertainment. The Emperor Caligula, a persecutor and murderer of Christians, engaged in incestuous relationships with his sisters and had people tortured during his many sexual escapades. Nero had two boys for sexual pleasure.

Christians, however, faithfully adhered to the teachings of the Scriptures which forbade sex outside of marriage, pedophilia, homosexuality, and other lewd sexual behaviors.

By opposing the Greco-Roman sexual decadence, whether it was adultery, fornication, homosexuality, child molestation, or bestiality, and by introducing God-pleasing sexual standards, Christianity greatly elevated the world’s sexual morality. (p.94)

Women Are Freed From Bondage

In both Greek and Roman cultures, women were considered to be the property of their husbands. In fact, the only women who had any freedom at all were prostitutes or the mistresses who escorted men to events outside of the home. A Roman or Greek wife was not allowed to be present with her husband’s guests at a meal.

In addition, under Roman law, the father/husband had absolute control over his wife and children—even when the children had become adults. He alone could divorce, and he could execute his own children if he so chose. Roman law also forbade women from speaking in public settings, prohibited women from wearing multicolored robes, or wearing too much jewelry.

However, when Jesus Christ came into the world, He honored women and gave them respect. He violated Rabbinical Law by speaking to women, teaching them, and asking them for a response.

As the early Church took root in pagan cultures, Christians met in the homes of fellow believers; and many of these early worshippers were women who held leadership roles. The Apostle Paul, for example, refers to Phoebe (Romans 16:1-2) as a deacon in the Church at Cenchrea. Schmidt writes:

The early Christians not only included women in the life of the church, but they also gave them freedom and dignity unknown in the Greco-Roman and Judaic cultures. (p.107)

The inﬂuence of Christianity in freeing women from bondage also spread into other cultures where women were persecuted. Under British rule in India, the practice of suttee was outlawed in 1829. This centuries-old practice required the widows of their deceased husbands to be burned alive on altars as part of the Hindu religion.

Christian missionaries in China protested against the practice of foot binding for women. This horrid custom was abolished in 1912, but the practice lingered illegally until the 1920s.

Through the teachings of Christ, the early Christians engaged in a variety of charitable works including helping the poor and the abandoned infants, and establishing orphanages and hospitals to care for the less fortunate.

The Greeks and Romans had no such ideas of compassion. In fact, they discouraged efforts to help the poor. The Roman philosopher Plautus wrote:

You do a beggar bad service by giving him food and drink; you lose what you give and prolong his life with more misery. (p.129)

In America, this belief in Christian charity helped in the formation of dozens of service clubs including the Young Men’s Christian Association (YMCA) and YWCA, as well as organizations such as the Baptist Life Association, Catholic Workmen, Lutheran Brotherhood, and more.

Christians were also instrumental in bringing about reforms in child labor laws both in Europe and in the U.S. In England, Christian legislator, Lord Shaftsbury, helped pass the Factory Act of 1833 which limited the number of hours children could work. Other reforms followed.

One of the greatest contributions to humankind from Christianity is the idea of liberty under law. This idea stands in stark contrast to the Communist, Socialist, Fascist, and Islamist dictatorships that oppress individual freedom and destroy productivity and individual creativity.

Dr. Schmidt notes that the Magna Carta, signed in 1215 by King John of England, was one of the most signiﬁcant documents in human history. It forced the king to recognize the following: 1. Justice could not be denied freedmen who were under the authority of barons; 2. no taxes could be levied without representation; 3. no one could be imprisoned without a trial; 4. property could not be taken from anyone without just compensation.

This document ushered in a new era of liberty in England and was the foundation upon which the American view of liberty was built. The Magna Carta was created with the help of Stephen Langton, Archbishop of Canterbury. The principles outlined in the Magna Carta were ampliﬁed in later history through the writings of such Christian theologians and philosophers as Martin Luther, John Locke, and others.

John Locke’s Two Treatises on Government (1690) maintained that government existed to uphold the natural law, and that tyranny violated these natural rights granted to mankind by God.

Locke’s writings inﬂuenced our Founding Fathers in the writing of the Declaration of Independence and our Constitution, thus giving Americans a system of government unrivaled in the world.

Wherever Christian ideals have been generally accepted and their practice sincerely attempted, there is a dynamic of liberty; and wherever Christianity has been ignored or rejected, persecuted or chained to the state, there is tyranny. (p.270)

In Roman and Greek cultures, manual labor was considered demeaning and a task for slaves, yet the principles of Christianity placed a high value on the dignity of hard work and industriousness. Dr. Schmidt observes:

…capitalism is a by-product of Christianity’s value of freedom applied to economic life and activities. To be sure, the economic freedom of capitalism can be abused and misused, and on occasion this has unfortunately happened. (p.207)

Is it merely accidental that the greatest amount of freedom and the accompanying economic prosperity happen to exist in countries where Christianity has had, and continues to have, a dominant presence and inﬂuence? (p.207)

Nations that have adopted Communist or Socialist economic systems typically stiﬂe individual freedom and discourage productivity. One need only look at the economic systems of South Korea compared to North Korea to notice the stark contrast between free enterprise and Communism—where the state controls all economic activities.

The entire world has beneﬁted from the inﬂuence of Christians and Christian ideals throughout human history. Regrettably, most Christians—myself included—have never understood the contributions Christians have made to the kind of world in which we live.

Dr. Schmidt’s book is must-reading for any Christian who wants to understand the importance of Christianity not only in one’s personal life, but also in how Christian principles provide for both political and religious freedom.

Throughout the book, Dr. Schmidt warns of the dangers of the paganization of our culture by individuals and groups that are seeking to strip away the moral foundations of our nation. Christianity in America is forever linked to the ideals of individual liberty and Biblical morality. When Christian principles are stripped away, we will lose liberty, and our nation will plunge into the kind of decadence that existed in ﬁrst-century Rome and Greece.

Under the Inﬂuence is not only a compelling history book; it is a call to action for Christians in the twenty-ﬁrst century to inﬂuence their culture as did Christians throughout human history. Will we heed the call?Ω

Frank York (photo unavailable) is a freelance writer who lives in Nashville, Tennessee. He works as editorial director for the Traditional Values Coalition and is author of several books including Protecting Your Child In An X-Rated World and When The Wicked Seize A City. He formerly worked for Focus on the Family, Concerned Women for America, and the Christian Broadcasting Network.