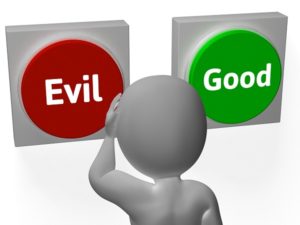 We live in the challenging times of what we might call “moral fluidity.” For nearly two millennia Western culture has been guided by Judeo/Christian moral and ethical values. That doesn’t mean that no one violated them, of course. Every human being has violated them. As we pointed out last week in “The Good, Good News,” we are all moral failures – but at least everyone knew what the moral standards were! Yes, people often tried to justify bad behavior or hide it, but their justifying and hiding just demonstrates recognition of the moral standards which were put in place by God.

Over time, as we have all witnessed, opposition which rose up against biblical moral principles, and “enlightened” people began arguing that morals are not really absolute, but are mere social constructs determined by the various cultures. To support that view, they might cite the differing moral practices from India, say, with those of the good old U.S. of A. In India for example, certain sects (Jains) do not eat meat. They wear gauze masks and sweep as they walk to avoid stepping on or inhaling a bug. In America, we have no problem eating meat. Hasn’t McDonald’s sold over a Zillion burgers? However, as Dr. Francis Beckwith points out, a different more probing question should be asked – what is the underlying reason for these practices? The reason Jains refrain from eating beef or inhaling bugs is their belief in reincarnation. You see, the Jains believe that a cow or bug may be Grandma, and they believe it’s morally wrong to eat Grandma! Here in America, we also consider it morally wrong to eat Grandma. So, we find that in both cultures it is morally wrong to eat Grandma! In talking to some folks, they would think they had me trapped by pointing out that cannibals eat humans, and do not consider it morally wrong. Yes, that is true, but even cannibals don’t eat their Grandma! In all cultures, it is morally wrong to eat relatives. Even cultures not steeped in Judeo-Christian morality have a God-given conscience to let them know basic right from wrong.

We have a different situation in play today. Over two decades ago we were telling others that the way our culture was trending, same gender marriage would be legal sometime in the near future, with the acceptance of polygamy and pedophilia not far behind. At the time Gays were claiming that what goes on in their bedrooms behind closed doors is no one else’s business. Live and let live. Now of course, what once was done behind bedroom doors is suddenly EVERYBODY’S BUSINESS, and their once-private acts must be paraded before and accepted by all. No, not just accepted – celebrated! Most did not take our warnings seriously, but here we are. In 2012, Chicago Mayor Rahm Emanuel declared that traditional marriage is “not a Chicago value.” Wow! How was that decided? Did they take a vote? Also in 2012, the question of whether to embrace same gender relationships began showing up in megachurches.

At the time, Al Mohler commented on this ominous trend in “Is the Megachurch the New Liberalism?” In a talk by Pastor Andy Stanley of North Point Church, Stanley was clear that adultery would (still) disqualify someone from serving in the church. However, those engaged in homosexual relationships are free and welcome to serve. Warning, Will Robinson!! Warning, warning!!!!

The pressure on culture, Christians, and the church to abandon biblical morality and affirm a new moral fluidity has increased exponentially since 2012. Once the flood gates were open, everything became fair game. Live and let live? It’s gone brother. Now it’s conform, accept, celebrate – or shut up and hide in the closet.

Sexual fluidity and identity is now a matter of personal choice. If you are biologically male but feel like a female (how does a biological male know what it “feels like” to be female?) the Department of Education mandates that schools let such biological males shower with biological females, use the bathroom facilities where they would “feel” most comfortable, etc., or lose educational funding. The problem increases as more “gender choices” are invented. If it seems to you that many of these choices are exceedingly childish, it’s because largely they are being invented by “children,” arrested development college students who have been propagandized throughout their grade school and high school years, AND taught that they are SHINING STARS who can do no wrong. The so-called “Snowflakes,” who might melt when confronted with micro-aggressions. (Micro-aggression = disagreement) So sure of the rightness of every ridiculous cause they embrace, they are beginning to turn on their liberal professors for not being FAR OUT ENOUGH! Did these professors never learn that eventually the children of revolution turn on their elders and eat them? Or lop off their heads, at the very least.

We should clarify that we are not condemning the whole of the young generation by any means. Boomers have no right to blanketly condemn any other generation, we thinks. 😊 We believe there are many of the younger generation that do not go along with the new immoral “moral fluidity,” and understand and sympathize greatly with the current pressure to conform they are facing on all cultural fronts. We ourselves were children of the 60s, and we – and many others of our generation – certainly did not buy into the sexual/political revolution that exploded at that time. Sadly though, the young who are now buying into these lies will be teaching the next generation and those to follow. Many of them will work in other professions that are going to make the laws of the future. This is what most Christians, conservatives and traditionalists of the boomer generation did not realize when the 60s “revolution” had run its course (we thought) and things had settled down. The 60s era radicals had “settled down” to teach in the schools, universities and write the rules for the future!

As of 2014, Facebook had 71 gender options available to choose from!  If anyone like MCOI stands firm on biblical moral values, we are labeled immoral, homophobic, transphobic, or whatever of the 71 gender phobic choices we now have. Yet, every day the fluid morality grows more fluid, ever changing at the whim of the mob in power at any given moment. How long will it be “wrong” to believe that engaging in sex with children is a gross evil? After all, God made the pedophile who he is – who are you to judge? And children should in any case be free to choose. After all, if they can choose their gender at 6 or 7 years old why should they be able to make use of those choices in recreational sex? If we look at all the changes in sexual propriety over the last 20 years, what will the landscape look like in another 20?

It isn’t only sexual issues, of course. Fluid morality permeates nearly everything in life. Belief in Global Warming (or Global Climate Change) is an extremely popular religion today. It has its own moral codes, its own set of sins. If you disbelieve in their god – or more properly, goddess – you are immoral – a denier, a heretic.

We are a culture cast adrift in pursuit of fulfillment apart from God. The farther away from God we move as a culture, the more we lose our bearings on what is right and wrong. It is like being cast adrift in the ocean and the further we are from any land masses without a compass or objective way to navigate, the less likely it is that we can determine which way to go. Everyone’s opinion becomes equal to truth.

We are seeing Romans 1:28-31 played out up close and personal:

And since they did not see fit to acknowledge God, God gave them up to a debased mind to do what ought not to be done. They were filled with all manner of unrighteousness, evil, covetousness, malice. They are full of envy, murder, strife, deceit, maliciousness. They are gossips, slanderers, haters of God, insolent, haughty, boastful, inventors of evil, disobedient to parents, foolish, faithless, heartless, ruthless.

The local church should be a safe harbor for believers who are regularly subjected to this madness. We see the strength of the early believers laid out in Acts 2:42:

And they devoted themselves to the apostles’ teaching and the fellowship, to the breaking of bread and the prayers.

They weren’t trying to figure out new ways of marketing to unbelievers to get them in their doors. They learned sound doctrine, and they taught it to others. They fellowshipped, encouraged one another, gave cheerfully to their brothers and sisters in need, and prayed with and for one another. They prayed for and sought to rescue the lost souls outside, but they did not deny truth to pander to them. They, like us, were surrounded by a culture that disdained their morality, and disdained them. But, then as now, God was with them.Ω