The Art of Deception – Deux

The Walking Dead (From door to door)
Friends 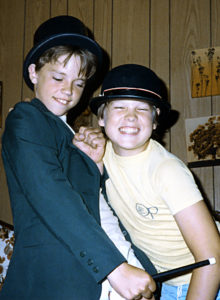 Good deception (by “good,” we mean effective) uses language to guide one’s thinking in a particular direction. Sometimes deception is harmless fun, as in the case of “magic” tricks, surprise parties, harmless pranks, etc. When our son, Lee, was a lad, he and his friend Mike were great “magicians,” enamored with little tricks based on illusion, sleight of hand and/or misdirection – i.e. deception. One of his favorite (and most successful) tricks was called “Cups and Balls.” Lee’s Uncle Stephen was visited, and Lee performed the trick for him again and again, but Stephen just could not figure out how the trick worked. The “magician” begins by producing three cups stacked inside of one another along with three fluffy balls in one. He (or she) introduces the audience to the elements which will be used, and this initial description shapes how the audience will think about what they are witnessing. Instead of further explaining it, you can watch Mike Patrick demonstrate it:

It is a very effective little trick if done correctly, but the bulk of the deception takes place before the first ball is put on the first cup. The deception does not rest upon a complete lie, but a partial truth. Three cups and three balls are shown to the audience, but a fourth ball is not included in the description. This is a case, of course, of keeping important information from the mark in order to deceive. In this case it is not harmful but is just a bit of fun entertainment. And of course, in theatrical “Magic Shows,” whether performed by professionals or 11 year olds, the mark KNOWS he is being deceived – the fun for him is figuring out HOW he is being deceived.

Not all deception is benign, of course. Cults and false teachers engage in the art of deception to the spiritual and sometimes physical detriment of their marks, who are craftily lured into embracing false beliefs. When a Christian watches so-called “Christian teachers” on TV, or listens to “Christian Radio stations,” they are not suspicious that these preachers may seek to deceive them. If false teachers such as Gwen Shamblin are invited right into their church to teach a workshop on supposed “Christian weight loss methods,” many if not most Christians feel perfectly safe to let their guard down and accept at face value whatever she teaches, leading them ultimately to leave their supposed “Apostate Church” and join Gwen’s very own personal cult group, Remnant Fellowship. She readily shows them three balls and they have no reason to believe she has a hidden ball secreted away. Yes, she believes in the Bible. Yes, she asserts a belief in God and even uses the name of Jesus Christ. Yes, she seems very learned, pious and earnest. Her trap is set. These unsuspecting Christians never see the fourth ball of false doctrine coming: The Trinity doctrine can’t be true, because the word isn’t even in the Bible. It’s a pagan teaching. Your church must be apostate, and your leaders tools of Satan, since they don’t teach the important “truths” I teach, etc. etc. Many Christians have at least heard that Jehovah’s Witnesses and Mormons are deceivers, so they may not let them come in and present their false gospel and false Christ, but Gwen came right in the front door of the church, so people were not looking for deception from her. (To learn more about Gwen Shamblin and her false teaching,  see our Journal article “Weighed Down with False Doctrine?” in Pdf ).

Religious cults are not the only ones out there seeking to pull wool over our eyes. The art of deception has been especially useful in the cultural revolution and in bringing about drastic changes in American thinking towards Evangelical Christians. Tim Rymel in his Huffington Post article “Has Evangelical Christianity Become Sociopathic?” engages in crafting a misleading narrative which guides the reader to accept his premise. The narrative contains some partial truths, but since these half-truths are dishonestly defined, they lead the reader to accept falsehood. His opening statement is:

Since Evangelical Christianity began infiltrating politics, officially in the late 1970s, there has been a disturbing trend to limit or remove rights from those who don’t meet the conservative idea of an American.

The underlying implication is that Evangelical Christian citizens were uninvolved in the political process until they began sneaking in (infiltrating). Here is where partial truths are used to deceive the reader. It is true that Evangelicals were not organized as a voting bloc, but they certainly tended to vote according to their Christian conscience and beliefs. It is more the case that Democrats and Republicans were far closer in their moral and ethical views in the 1950s, 60s and 70s than they are today. In fact, it was largely due to the Evangelical vote that Democrat Jimmy Carter was elected president because he was perceived as a moral and good Christian man, who taught Sunday school in a Baptist Church! In hindsight, Carter may have had a few quite fuzzy balls up his sleeve, but that was not apparent beforehand. 😊

In truth, the Judeo/Christian worldview was largely the guide on moral and ethical behavior at that time, was highly influential in both of our major political parties, and had guided Western culture for nearly two millennia. Roe v Wade wasn’t a huge issue for most Americans until apologist/philosopher Dr. Francis Schaeffer and physician Dr. C. Everett Koop began doing their talks, book and DVD series, Whatever Happened to The Human Race?  After that, Evangelicals woke up and realized there were serious moral and ethical problems being perpetrated on our nation by political and university leadership, and activist judges. The late 1970s simply saw Evangelicals organizing to take a united stand for what they believed in.

As far as the left is concerned, liberal/progressive organization is viewed as a very good thing – a leftist organizer might just end up becoming President! But if and when Evangelicals engage in organizing, it is cast as an evil act of “infiltration.” For liberals and progressives to petition the government to legalize and legitimize what had up until that point been viewed as immoral behavior is viewed as good and right, but petitioning the government to hold fast to traditional views of right and wrong is dubbed by Tim Rymel “a disturbing trend to limit or remove rights…”

The props for Rymel’s illusion are in place with the opening line. The rest is simply performing a verbal sleight of hand. His claim that there has been a “redefinition of Christian theology” is highly deceptive. It leaves the reader with the impression that the Evangelicals are the group that have been bent on “redefining Christian theology,” when it has been the left that is doing that. Here he appeals to liberal (and socialist) Tony Campolo, with yet another bit of artful deception:

Evangelical speaker, author, and university professor, Tony Campolo, said Christianity was redefined in the mid-70s by positions of “pro-life” and opposing gay marriage.

While it is true that once Evangelicals understood the essence of Roe V Wade they became opposed to it and sought to swing the nation back to its traditional moorings. Why in the world would that be wrong? But notice, in the 1970s, there was no controversy about “Gay Marriage.” Neither Republicans nor Democrats (the common folk, at any rate) ever gave such a thing a thought. It has not been the right, but the left that has careened from one bizarre issue to another, pushing what clearly was a right of center nation to accept – and seeking to force Her to embrace – the left’s every whim, and there have been many. Recently, Gay Marriage became their new pet whim. (Both President Obama and Hillary Clinton took the position in 2008 that marriage was between one man and one woman – this was LONG past the mid-1970s.)

Surely, the left has no intention of stopping there, however. Soon, we’ll probably be pushed to accept pedophile marriage, bestial marriage, incestuous marriage, group marriage, and who-knows-what, and the left (and men like Tony Campolo) will keep redefining Christianity at warp speed to suit these whims.

So now, after carefully placing the cup and seemingly making the fuzzy balls travel miraculously through them all, Rymel comes to his ta-da moment:

And somewhere in the middle of all the change, Evangelical Christianity crossed the line of faith and belief to hatred and abuse.

You see, one cannot simply disagree with the left. Anything less than affirming and celebrating their newly minted moral codes is hateful and abusive. Fascist, even.

Rymel uses all of this to bring us to the conclusion that humans, not God, are the arbiters and shapers of spiritual truth which is, according to him, “fluid.”

Every generation redefines what it means to be, or belong to, a religious group. Religious ideologies, interpretations, and doctrines are fluid. But whatever it is, or whatever it becomes, is made by the people who belong to the religion and what they collectively decide to make it.

But we are reminded of the slippery slope that the Apostle Paul describes in Romans 1:21-25:

For although they knew God, they did not honor him as God or give thanks to him, but they became futile in their thinking, and their foolish hearts were darkened. Claiming to be wise, they became fools, and exchanged the glory of the immortal God for images resembling mortal man and birds and animals and creeping things. Therefore God gave them up in the lusts of their hearts to impurity, to the dishonoring of their bodies among themselves, because they exchanged the truth about God for a lie and worshiped and served the creature rather than the Creator, who is blessed forever! Amen.Ω

The Walking Dead (From door to door)
Friends