The Art of Deception - Deux
You Have Died of Sneer Review 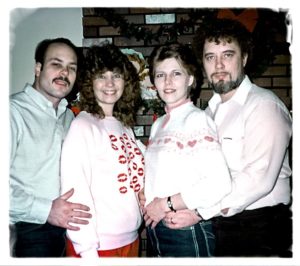 Once a month, our good friend Penny comes and spends a night with us. There is nothing like time spent with a true friend to lift and strengthen the spirit. Penny has been our friend for 50 years this year, so we have a real shared history. Penny and her fiancé stood up in our wedding, and a year later we switched roles and stood up in theirs. We had our kids, who grew up together, at about the same time. We became family, not by birth but by choice. Along the way an odd thing happened. After our first child was born, a new sense of responsibility settled on Joy’s shoulders, causing her to wake up spiritually and return to her faith in Christ. She began sharing with me, and thankfully, for my soul and for our marriage, I left my “soft atheism” behind and embraced the faith.

It was not long before we became to be concerned about the spiritual welfare of our good friends, Penny and her husband Bill. We felt strongly that we needed to share the gospel with them – but how would we even begin? Our faith had brought about a big change in our lives, and we didn’t want to alienate them. Yet, we knew we needed to speak.

Even as I write this, I chuckle at what happened next. The next time we went to spend an evening with them, we felt a little fear and trepidation on the way. What would we say? While we were there, Joy dropped a few “hints” to open up the discussion, – but we soon realized that Penny was also dropping “hints” to us! What? As it turned out, while God was working on us, he provided Penny with a good friend and neighbor who shared the gospel with her. Now she felt she needed to share her faith with us, but she didn’t know where to begin. With all of this spiritual talk swirling around his head, Bill was quite taken aback. That first night, he thought we were all crazy. However, it wasn’t long before he also came to the faith. That all happened about 43 years ago.

In the late 1970’s, God brought some Jehovah’s Witnesses into Joy’s life that she came to care about deeply. As a result, she became burdened (and in turn burdened me!) to learn about their beliefs to try to reach them with the true gospel. In the process, we became educated on the essentials of the historic biblical Christian faith. We involved ourselves in apologetics, and started this ministry to reach out to people caught up in cults, with an emphasis on Jehovah’s Witnesses.

It wasn’t long, however, before we began noticing that not all doctrinal problems were outside of the faith. Many questionable teachings and practices were making their home inside the church. Yes, the church has always had to fight false teachings within, but it did look to us (and many other concerned apologists) as though some proverbial floodgate had opened up! Word-of-faith televangelists, postmodernism,  New Age spirituality, and the social and self-esteem gospels, among others, were all making great inroads into the church. Many Christians embraced these ideas, not even realizing there was/is a serious problem with these concepts. Much of the church, even many leaders, seems to feel that if popular Christian personalities or ministries embrace any new teaching, there can be nothing wrong with them. It appears to be our evangelical “Stamp-of-Approval” process, but way too much heresy gets approved by this method.

One very destructive popular teaching (in the1990’s, especially) was the idea of Repressed Memory Syndrome. Many families and even churches were ripped apart by completely false accusations of supposed Satanic Ritual Abuse, without a shred of evidence to back up the very serious charges. It was a very popular fad in the secular culture at the same time, so a number of innocent people ended up in prison for imagined crimes. Sad to say, many Christian counselors and Christian organizations created a cottage industry around ferreting out “Satanic Ritual Abusers” and bringing “healing” to their accusers. Many alleged “victims” knew nothing about their victimization until they visited one of these counselors and were, through hypnotism and other suggestive techniques, brought to understand that daddy or uncle or grandma had been secret Satanic occultist who had abused them, and that this abuse was the “underlying cause” of their bulimia and anorexia and other maladies.

Often, the alleged victims/accusers lives were likewise destroyed by the fear and helplessness that was instilled by these “helpful” counselors. After all, if you learn that your dearly loved family members have abused you for years, and you cannot even remember the abuse, how can you ever believe that anyone can be trusted? How do you know that your current memories are accurate? How can you know what heinous acts YOU may be committing and blocking out of your memory? It was a very destructive fad that thankfully has died down considerably in the ensuing years, but the Christian landscape is still littered with the corpses of the falsely accused. How does a parent get over such an accusation, especially if the charges were never rescinded? Where can someone go to get his or her reputation back?

False teachings of all types do keep apologetic oriented ministries busy. I guess I have what I call a “red pencil” personality. That expression comes from the day when school-teachers graded papers and used a red pencil to check mark, circle, or in some other way notate a wrong answer, spelling, punctuation, etc. I tend to do that with worldviews, theology, music, books, films and other ways culture and cults attempt to persuade us to embrace their erroneous beliefs and practices.

Apologists often need “red pencil” personalities to filter cultural fads though a Christian worldview. Yet, sometimes red pencil personalities can be deaf to what others are trying to convey. I was reminded of that this past weekend. Penny was up for a visit and the three of us went out to dinner. Penny was sharing her thoughts on a television series she had just watched, about teen bullying and suicide, and true to form, I started asking questions about the worldview behind the series. Only a Christian worldview, I argued, could honestly take the position that bullying was even wrong. A culture based in Darwinian relativity can’t justifiably identify any action as “right” or “wrong.” The most they could honestly say is that something is wrong for them. The problem is that I was talking abstractly about worldviews, while she was drawn into and deeply touched by the personal issues that were raised. We were having two totally different discussions. Finally, Joy, who saw that our conversational lines were not even crossing, stopped us and brought some clarity to the conversation, pointing out that we were not even discussing (arguing about) the same thing. Penny on Earth was saying the rock is hard, while I on Mars was talking about the fact that the rock was red. Sometimes we need to listen more attentively to what other of God’s people are saying. Let’s make sure we’re on the same planet, at least. I certainly need to be reminded that we are all different and to remember that God has so constructed the Body of Christ to both challenge and complement one another as we each live out the faith, according to how He has equipped and gifted us. Paul writes in Roman 12:4-18:

For as in one body we have many members, and the members do not all have the same function, so we, though many, are one body in Christ, and individually members one of another. Having gifts that differ according to the grace given to us, let us use them: if prophecy, in proportion to our faith; if service, in our serving; the one who teaches, in his teaching; the one who exhorts, in his exhortation; the one who contributes, in generosity; the one who leads, with zeal; the one who does acts of mercy, with cheerfulness.

We really do need one another, in so many ways.Ω

The Art of Deception - Deux
You Have Died of Sneer Review