Andy Stanley and The Sound of Music

Your Money or Your Kids
Andy Stanley and the Bible 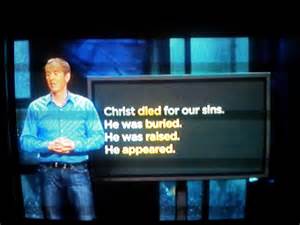 I met Dani on my first trip to Israel in 1997. She was seated next to me on the plane, and as I recall, reading some New Age type of book. I overcame my normal shy, retiring self and asked her a question, which received a sort of “go away, you narrow minded fundamentalist” response. Well, in fairly short order, we were engaged in a very lively discussion. She had grown up in fundamentalist and evangelical types of churches, and had received Christ in her youth. But as she matured, she had questions about the Bible. When she took those questions to the church leadership at various times, she was most often told, “You just have to have faith.” Eventually, she came to the conclusion there were no good answers to her questions. She came away thinking that to be a “good” Christian, one must, like Maria in the Sound of Music, have confidence in confidence alone – to have faith in faith alone. That was not satisfying to her inquiring mind, and seemed intellectually dishonest. By and by she turned away from the church, and became involved in something called The Urantia Book. 2See Re:The Urantia Book by Eric Pement; http://www.culthelp.info/index.php?option=com_content&task=view&id=823&Itemid=10

As Dani and I spoke and she raised her objections and questions, I asked her how she had formulated her worldview. She stopped and said, “What is a worldview?” As I began explaining it, she was intrigued. Dani loves knowledge and was surprised to learn that there is indeed a solid basis for our faith and answers to our questions. Over the 10 days, as we traveled throughout Israel, there was pretty much non-stop Q&A between Dani, my friend Randy, and I on worldviews and the biblical questions that had been plaguing her. Dani went home a transformed woman. She rededicated her life to Christ and began the process of developing a biblical worldview.

I wish I could say that Dani was the only one I have had this type of discussion with, but that would not be true. Many who have been raised in a Christian home and attended church, but have left it behind, tell a similar story. I regularly receive calls from believers who are looking for answers to give atheists (and others) who challenge their faith, who have, like Dani, been told by their church leadership, “You just have to have faith.”

The word “confidence” in Maria’s song above could easily be substituted by the word “faith,” because faith and confidence are synonyms. Having confidence in confidence or faith in faith is nonsensical. It is really just wishful thinking. Confidence or faith can only be based on preexisting, reliable and confirmable evidence. In the case of “The Sound of Music” there is a larger context for Maria’s conclusion. As she is traveling to take her position as a Governess (nanny), the song begins with questions of what it will be like. It moves to her fears, and then she begins enumerating things she can be confident in. Her conclusion that confidence is justified is based on her experience in life and observations of the world around her.

What does any of this have to do with Andy Stanley, you may ask? Quite a bit actually. Last week we wrote, “Andy Stanley and the Bible” and expressed concerns, based on a talk which he gave in which he implied that the scriptures are not a solid foundation for our faith. In the blog, we pointed out that Jesus had great confidence in the scriptures, and used them to validate what He taught. We further showed that the apostles and the Ante-Nicene Fathers likewise trusted and made full use of the scriptures. It seemed as though Andy Stanley was diminishing the Scriptures, and instead promoting using the resurrection of Jesus, apart from Scripture, to defend our personal faith. That of course, is an untenable position, since most of our information about the resurrection comes from the Scripture, with support from outside secular sources. Our concluding statement was:

We hope that Andy Stanley believes in the inerrancy and inspiration of Scripture – and he may, but that isn’t apparent in this talk.

We are fortunate that we have supporters and Advisory Board members who are willing to call problems to our attention, and keep us accurate and accountable. In emailing with supporters who attend Northpoint Church, and one who has watched the series, as well as some emails with Dr. Norman Geisler we have gained a larger context to Stanley’s comments.

Second, in this series, the reliability, inspiration and inerrancy of Scripture had been affirmed, according to both our friend who attends the church and a supporter who has watched the series.

Third, we have been told that the church regularly teaches on these issues in various classes, as well as affirming them from the pulpit as it becomes necessary.

Fourth, the larger context of the issue is that Stanley’s talk was aimed at folks who, like my friend Dani, have questions. Stanley, in this context, was making the point that there are things in Scripture which seem to be troublesome, but that people should not abandon the faith based on those, because the faith is based on an event, the resurrection! He contends that the rest tends to fall into place, based on the validity of that event.

The individual who attends Northpoint with his wife made an interesting comment. He said that when Andy is speaking, from time to time the way he states things sometimes makes them sit up and think, “That will be on Facebook and Twitter, out of context.” This seems to be a case in point. Stanley’s phraseology in this talk is troubling to many – it certainly concerned us – and did indeed make the Facebook and Twitter circuit. But those who have more information have assured us he has not gone over to the dark side on inerrancy and inspiration.

So, if we conclude that Andy Stanley is truly sound on this issue, why not just take down our previous post? Wouldn’t that be easier? The bulk of the material in that blog is good and useful for defending Scripture and the resurrection. Second, it is a reminder of the importance of context which sometimes means getting a bigger contextual picture. I appreciate those who cared enough to raise their concern.Ω

Your Money or Your Kids
Andy Stanley and the Bible