The Goose Chase Brian McLaren Finds Himself In 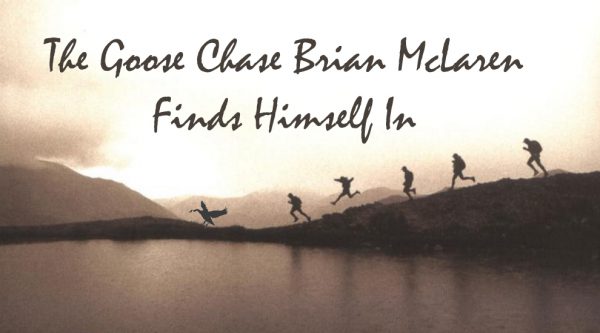 I had a call last week from one of our supporters, wondering if I knew that Brian McLaren, Emerging Church leader and writer, is involved with the Wild Goose Festival. For those who do not know, the Wild Goose Festival is a gathering of the fallen away, eager to share and celebrate their apostasy with others eager to applaud them for having the courage to slap the face of God. I don’t follow the festival circuit very closely, so I was unaware of McLaren’s participation. When I asked the caller why this seemed so important to him, I was told that McLaren was teaching a pro-gay message. That is not really surprising to me. In 2012, McLaren officiated at his son Trevor’s same gender marriage ceremony. How could McLaren, ordained as a pastor in an Evangelical denomination, justify this level of support? Very easily. He places experience above Scripture as authoritative. As the Christian Post noted:

It had just been a couple of years when McLaren shifted his thinking and abandoned the traditional view of homosexuality being a sin that he grew up with.

“I had gone through my change in this view before I ever guessed that any of my kids might be gay,” he said on the radio program.

“I was a good kid, I believed what I’d been told. And as a pastor, I started having gay people come out to me and what became clearer and clearer to me is that their experience was not explained by the theology I inherited,” he explained. “And that it would be unjust to continue to uphold what I’d been taught. Maybe I could say it like this: My call to love God and love my neighbor was in conflict with what I’d been taught the Bible required me to say and do.”

We posed the question in 2008, “Is Brian McLaren a Christian?” In this article we demonstrated that McLaren had pretty much abandoned the historical-grammatical understanding of Scripture in favor of the Social Gospel of the late 19th and early 20th century liberal, Walter Rauschenbusch, Jesus Seminar co-founder, John Dominic Crossan (see our Hysterical Search for the Historical Jesus), Socialist and Black Liberation Theologian Cornell West, and Karl Marx, among others.

Since then, he has further “evolved” to practice and endorse pagan rituals and practices, tossing out even more of what, to use his words, “the Bible required me to say and do.” He is a man in pursuit of “spirituality,” but he judges the validity of spiritual claims and practices on experience and not on God’s revelation in Scripture. At a number of conferences over the past several years, he facilitates pagan rituals to help attendees become more “spiritually aware” and “attuned.” So, McLaren’s Wild Goose Chase to the Wild Goose Festival makes perfect sense. Participant Frank Schaffer (New Age son of the Late Francis Schaffer) says in the promotion:

Brian McLaren’s Wild Goose Chase to the Wild Goose Festival makes perfect sense. It is a modern day “Corinth in the woods” where any and all religious expression and belief is embraced and lauded, provided no allegiance to the one true God is required or holy living as He prescribed is expected.

They emerged from us, but they were not of us; for if they had been of us, they would have continued with us. But they emerged, that it might become plain that they all are not of us.