Hey… Where Did The Devil Go?
The Purpose Driven Claim 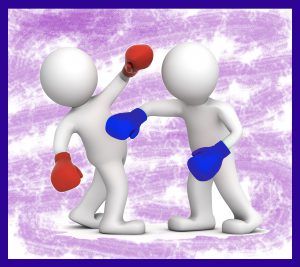 OK friends, the 2016 Presidential election season is in full swing. It is an odd one, that’s for sure. As Brit Hume from FOX said, each candidate’s high negatives with certain blocks of voters is the other’s best hope. The pundits and talking heads spend endless hours analyzing and pontificating on who will win and why, which demographic is the most important at any given moment and what each candidate needs to do to gain this or that constituency’s vote. Unfortunately, no matter which candidate eventually prevails, he or she will be very unpopular with a high percentage of the population, right from the get-go. In our opinion, our nation is very deeply divided, probably more so than any time since the Civil War, and it’s very hard to see how such deep rifts can ever be healed. “We the People’ have been at war with “We those Other People” for several decades now. Fourteen years ago, in our Fall 2002 article, “America at War with Herself” we spent some time talking about the division that had already engulfed the nation, and talked about “Middle America,” who traditionally sits in the middle of this tempest and watches – as much as they can while trying to take care of their own families and business – what is going on. It is a fairly large group, but does not get the attention that is given the activists on the fringes. But they do vote.

As much as the East and West Coasts tend to think Middle America is more or less fly over country, it is really not truly a matter of geography. Although MA has tended in the past to hold to Judeo-Christian values, they are religiously and occupationally and ethnically diverse. However, they do hold some very important things in common. They care about their family, and work hard 50 weeks a year, and they try to save enough to take an annual family vacation. These days, many are struggling economically, perhaps working several lower paying jobs to stay afloat. Some are doing well, but many are quite discouraged, yet still hoping that their children will get a good education and attain a better financial future than they. They are soccer moms and baseball dads. They are good neighbors who may share their opinions but don’t try to force their views on others, and expect the same respect in return. They like order – they want a safe and peaceful environment for themselves and especially for their children and grandchildren. Largely, they are not activists and perhaps most importantly, they do not like radical activism. Why? Because, as we already pointed out, they like order and peace! Radical activism is often lawless and anything but peaceful, and looks for all the world like utter chaos to these folks. As we discussed in our Winter 2005 Journal, “A Nation Divided.” “Middle America,” at least traditionally, not only doesn’t like radicalism but have tended to shift strongly away from radicalism when given a chance to vote. They tend not to like novel views forced upon them, totally without their consent or input. In the campaign season of 2004, one such radical view (to Middle America at least) that came to the fore was the issue of same sex marriage. Other contentious topics were partial birth abortion and pedophile issues. We laid out a timeline of events related to these matters in “A Nation Divided.”:

On February 4, 2004, activist judges on the Massachusetts Supreme Court mandated the state to rewrite their marriage laws to allow for same sex marriage. What followed was an assault on a number of different states and the sensibilities of its citizens who deeply resented the attempt by these extreme leftwing justices to force their immoral will on everyone else. The backlash which resulted was that 11 states placed anti-same-sex marriage amendments on their November ballots, with the result that there was a resounding defeat for “gay marriage” in all 11 states. Interestingly, these “marriage protection” amendments received overwhelming support even from Democratic voters, proving the point we made earlier that not nearly all Democrats embrace the radical leftwing agenda.

In late February of 2004, the ACLU [the Atheist’s Civil Licentiousness Union, or All Crooks Love Us, whichever you prefer] defended NAMBLA (North American Man-Boy Love Association), a group which openly advocates pedophilia, while at the same time they attacked the Boy Scouts of America, a traditionally popular group which teaches Middle American morals. “Values” lines were being drawn in concrete, not in the sand.

March 29 saw federal trials begin in Nebraska, New York, and California to overturn the ban on the especially heinous practice of partial birth abortion-where an infant’s skull is punctured in the womb, their brain sucked out, and their little skull crushed to ease the delivery of the now-dead, late-term baby. This case forcefully illustrates again that activist liberal judges care nothing for the will of the people, who overwhelmingly reject this procedure as barbaric and inhuman. Though the majority of Christians see abortion at any stage as being patently evil, Middle Americans may accept destroying little “bundles of cells” in Petrie dishes or wombs, but they balk at what is obviously a wantonly cruel murder of infants.

In July, the ACLU made news again as they filed suit against Baltimore and four counties for denying same-sex couples the right to marry. The fact that same-sex marriage is against the law didn’t seem to cross the minds of the justices.

Radical Progressives do not win the culture by winning over the hearts and minds of the general public. As this timeline shows, they lose most battles in the court of public opinion, but triumph in the courts of liberal judges, imposing their will on those without judges in their hip pocket. As we all know, radicals have made great strides in implementing their agenda since we wrote this article in 2005, only 11 short years ago, much of it through the court system. And, perhaps more insidiously, they have also made great strides with the young. They have accomplished this by dumbing down the traditional educational curricula, and concentrating their efforts on teaching radical political and moral views in schools and universities. And Hollywood and the popular music industry have been most helpful in this regard as well. Radicalism, of course, has also been greatly advanced by executive orders from the White House, issuing “guidelines” of behavior that must be followed…or else.

To add to the suspense, we are all aware that the future of the Supreme Court hangs on this election – which means that the very laws we shall all live under depends upon this election. Religious freedom probably hangs in the balance as well. We know that Presidential candidate Hillary Clinton has said straight out that “deep seated cultural codes, religious beliefs and structural biases have to be changed.” Are you willing to change your “deep seated cultural codes and religious beliefs” voluntarily? If not, then you should possibly get ready for involuntary thought reform – swallow your objections, keep your supposedly bigoted thoughts to yourself, and get with the program.

It has become apparent that not only is the nation divided, but so is the conservative movement. Conservative voters are deeply divided on many issues, such as immigration, national defense, trade, “the establishment” vs “the base,” the presumptive candidate’s flaws, and so on. Over the past few years, conservative voters have had their eyes opened to realize that many of the so called “social conservatives” they sent to Washington to represent them weren’t really all that conservative once they got there, and would abandon social conservatives and their morality-based issues when the gale winds of change started blowing in hard from the left. Who can be trusted? When it comes to human beings, we simply do not know.

The Christian church in America has long been a bulwark against immorality, so the church has become a huge target for the animosity of radical progressivism. We are called bigots, homophobes, and so forth, merely for believing what the Bible says. Unbelievably, Christianity rather than Islam was blamed by some progressives for the Orlando terrorist attack some weeks ago. We saw “man on the street” interviews with young people who almost invariably always blamed either guns or conservatives for that mass slaughter. Huh? Many Christians feel as if they went to sleep in America and woke up in the Twilight Zone. And, as if attacks from without were not bad enough, many evangelicals are abandoning biblical morality to keep up with the times, or to allow them to support a leftist political agenda which has become more important to them than “old fashioned” Christian teaching. Is the Bible not clear on right and wrong, good and evil? Of course there are also Christians of all backgrounds and races that are standing firm for the truth of God’s Word, and for that we should all be grateful.

So, whither goes Middle America in 2016? We cannot pretend to know. Are there still large enough numbers of family oriented traditional voting people to offset the new radicalization of so many of America’s youth? And with both of the candidates being such polarizing figures, and with all the aforementioned division, how many traditional voters will stay home in November? No one knows.

None of this catches God by surprise. He warned us that these evil days would come, and here they are. Sad as it may be for us to witness it, the Bible is proving true once again. If there is any good to come of all this turmoil, it may be to remind Christians that Jesus, not any man, is their champion, the One in Whom we are to trust.

Hey… Where Did The Devil Go?
The Purpose Driven Claim