What is THIS doing in an Apologetics Journal?
For Crying Out Loud: A Book Review 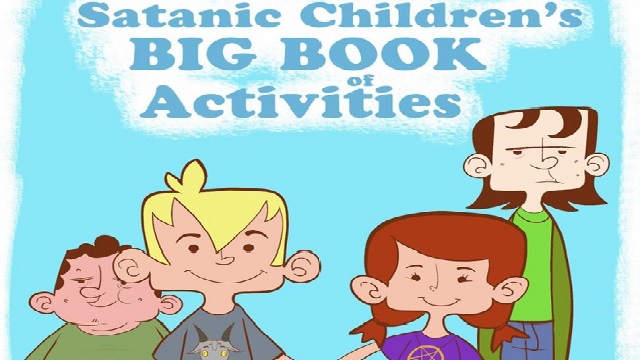 Joseph Laycock in an op-ed wonders if Satanists can affect political change in society. Things just keep getting stranger and stranger. The Temple of Satan has made its fame by taking advantage of religious freedom laws to pass out Satanist coloring books and erect a giant statue glorifying Satan along side the 10 commandments. Laycock investigated the Temple of Satan:

Since its founding, TST has waged a highly active campaign to demand greater separation between church and state, and to challenge the privileged relationship Christianity has with government. A cornerstone of their campaign has been tongue-in-cheek “stunts” intended to show how government institutions favor Christianity in ways that would never be tolerated for other religions.

There is no evidence that the TST even believes in the Satan as anything more than a metaphor for anti-Christian-fueled secular anger. Here’s there answer to the question: “Do you believe in Satan”

It is the position of The Satanic Temple that religion can, and should, be divorced from superstition. As such, we do not promote a belief in a personal Satan. To embrace the name Satan is to embrace rational inquiry removed from supernaturalism and archaic tradition-based superstitions. The Satanist should actively work to hone critical thinking and exercise reasonable agnosticism in all things. Our beliefs must be malleable to the best current scientific understandings of the material world — never the reverse.

So that would be a no. No actual worship of anything except individuality and personal freedom. Satan is revered as the myth that celebrates rebellion and questioning of authority. So when Laycock describes the TST’s ritual following the screening of a horror movie called “The Witch.” That ritual is just more theater. Angsty, angry, rebellious theater but theater none the less.

.  . . A long-haired beefcake shirtless in a black leather jacket—on his knees, chains wrapped around his wrist, pounding his fists into the ground. On either side of him, there were figures in sheer red cloaks covering their entire bodies. . . Behind all of them stood a figure in a black shroud covered from head to toe, in front of a black lectern. The entire area was adorned in black-and-white American flags, just like the ones that everybody in the room received as they entered. . .

But of course,  it’s not just theater to those of us who acknowledge something behind the spiritual curtain. I think Satan is real. Satan isn’t this being’s name; it is his title. “The Adversary” in Hebrew. His name isn’t Lucifer either. That’s just the Latin for “morning star.” We are told he is a roaring lion seeking whom he may devour and charlatan who masquerades as an angel of light. Those of us who trust the Bible think this being is not only personal but evil, selfish, greedy and murderous. A far cry from the not-so-satanic values of the TST:

I believe that the Satan would and probably does laugh at the misuse of his name. I believe that if any of the TST were to meet the Satan face to face they would quickly see how little he respect’s their individuality and the sanctity of their body. They, of course, think my belief is superstitious nonsense that does not conform to the “best scientific understanding of the world.” That all depends on whether or not the Bible is trustworthy–which is another blog altogether.

Attempts to revere individuality will descend into chaos without some underlying principle for why individuality is important. The same goes for value of the body, justice, and an naive commitment to secularism. Chesterton once said an open mind is like an open mouth, both are useless without something solid to clamp down on. Without a moral theory, respect for the individuality of others will give way to simple self-interest.

Consider the TST’s stance on abortion:

The Satanic Temple (TST) supports personal choice in the context of abortion and, as part of a multi-faceted Women’s Rights campaign, TST is offering religious exemptions from arbitrary, insulting, and outright harmful anti-abortion legislation that has been steadily encroaching across the nation.

Individuality and respect for others does not apply to the unborn even though the best scientific evidence gives no reason to think that fetus’ less than human. To willfully and unjustly encroach upon the freedoms of another is to forgo your own–except when it comes to tiny humans in the womb. So why the exception to this principle? The TST is rather silent, but I’ll hazard a guess. When individual respect and justice for others clash with self-interest, that is with one’s own individuality, then self-interest always wins. When justice clashes with one’s own self-fulfillment, then self wins always. Without some other value underpinning individuality and questioning authority, consistency is just another taboo to be flouted.

What is THIS doing in an Apologetics Journal?
For Crying Out Loud: A Book Review