Bill Gothard’s Powerless Gospel
Was Jesus a Guru, a Lama, or Lord? Part 5 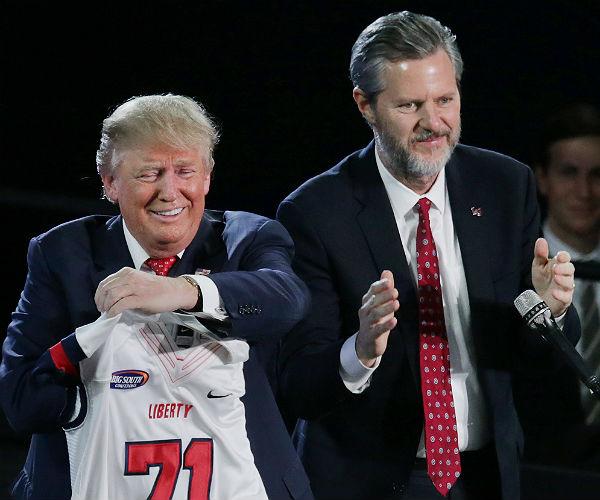 I get it. I really do. Americans are sick of career politicians with half-answers and more flip-flopping than Waffle House on a Friday night. Trump doesn’t give half answers and when he flips, he somehow makes you think it was only an oversight and really not a deeply held conviction that he’s reneging on. I get it. He’s not the establishment. He’s a successful businessman. When our country has been messed up by a bunch of wolves for so long, why not try some other kind of animal. Surely he can’t do worse.

All those reasons are why Jerry Falwell Jr. said Donald Trump continues to be–as I write this– the front runner in the 2016 presidential election. He just won the New Hampshire primary. When Falwell invited Trump to Liberty he said some really nice things about him. He also invited all the presidential candidates and said nice things about them too.  Though you can compare what he said about Sanders and Trump and judge for yourself, I think you could say that Falwell’s introduction of Sanders is the definition of “damning with faint praise.” Falwell Jr reminds us that Liberty University does not endorse candidates but at the same time, Falwell Jr didn’t join Sanders at a rally in Iowa but he did join Trump. If that isn’t Falwell’s own personal endorsement, I don’t know what is.

This is pure speculation but I get the impression that Falwell is trying to be a good influence on Trump. These are two people who genuinely like each other. It may be that Falwell hopes to exert some influence on Trump. More power to him. I pray he does some good. But should people thereby think that Trump is a strong Christian or a man of good character? Should Christians vote for him on this basis? Falwell pulls out the quote we at Midwest Christian Outreach, Inc. lament often gets misused. “You will know them by their fruit.” (Matthew 7:16) He says that Trump has born good fruit. What fruit? Falwell recounts how Trump paid off the mortgage of a couple that stopped to help when his limo broke down. He also mentions how Trump kept several doomed businesses in a small town. Admirable surely.

Vote for Donald Trump if you want to. Like Liberty, MCOI is a non-profit and won’t endorse any candidate. But if you vote for Trump do so for the right reasons.  Vote for him because you think he has the right policies or because you want to send a message that career politicians should wise up. Or because you think he will be shrewd negotiator with Iran.  Don’t vote for him because Falwell says he’s bearing good fruit. After all, Matthew 7:16 in context is about telling true prophets from false ones. The fruits in question can’t just be his good works of charity. A prophet’s fruit is what he prophecies. You know a true prophet by his words. Maybe the same can be said for presidential hopefuls.

Yes I know Donald Trump used the phrase: “Two Corinthians” but hey so does Ravi Zacharias. I agree with Bonnie Kristian, “Trump Has said Many Things about Christianity that are Way Worse than Two Corinthians.“

Just watch this footage and tell me if you think this is someone who spends a lot of time thinking about God and his love.

Trump on forgiveness: “I’m not sure I have. I just go and try and do a better job from there. I don’t think so. I think I if I do something wrong I think I just try and make it right. I don’t bring God into that picture. I don’t.”

Trump on going to church: “Well, I go as much as I can. Always on Christmas. Always on Easter. Always when there’s a major occasion. And during the Sundays. I’m a Sunday church person. I’ll go when I can.”

If I close my eyes, I could imagine a very immature Christian saying these things. And Trump is not the first to get a surprise catechism in public. I will remind you that Barak Obama gave a pretty good response to the question about his faith that sounded reasonably orthodox:

When it comes to Trump’s character,  I’m afraid we evangelicals seem to be exhibiting some huge hypocrisy. Here’s Russell Moore of the Southern Baptist Committee on Ethics

In the 1990s, some of these social conservatives argued that “If Bill Clinton’s wife can’t trust him, neither can we.” If character matters, character matters. Today’s evangelicals should ask, “Whatever happened to our commitment to ‘traditional family values’?”

Yes, Ronald Reagan was divorced but Reagan didn’t brag in a book about sleeping with the “top women in the world.”

Donald Trump may be a Christian but two things seem evident: he isn’t a mature Christian and Christianity doesn’t have much to do with his life. At least by his “fruits.”

Bill Gothard’s Powerless Gospel
Was Jesus a Guru, a Lama, or Lord? Part 5