Chasing What God?: Examining The God Chasers by Tommy Tenney
The (No) Dating Game 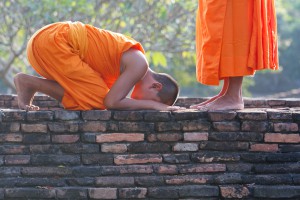 We survived another Christmas. It is fascinating that as that season rolls around there is usually a great push to be politically correct. “Merry Christmas” is replaced with “happy holidays”. Mangers are replaced with the new and improved reindeer sleigh display. Everywhere people don’t want to be offensive. It is usually in this atmosphere we will get some program or newspaper article that tells us what “really” happened at Jesus’ birth. On Christmas CNN ran program after program of searching for the “real” Jesus. Everyone from the liberal school of theology with their non-supernatural Jesus to the mystical religions with their Jesus guru, come out with the “real” story. All of it is geared toward a syncretistic view of religion, where no one is right or wrong and everyone’s truth claims are true for them we just all have a different piece of the truth. Don and Joy looked at this in ”Do All Roads Lead to God?” and demonstrated the fallacies in the Blind men and the Elephant story which is so popular in these discussions.

Liberal theologians and those attracted to eastern mysticism continue on “The Hysterical Search for the Historical Jesus” One of the more fascinating claims caught my attention this year, a peer reviewed article from 2005 entitled “Was Jesus a Buddhist?” by James Hanson concluded that according to history and doctrine Jesus was a Buddhist. 1Hanson, James M. 2005. “Was Jesus a Buddhist?” Buddhist-Christian Studies 75-89 The article utilized the so-called “missing years of Jesus” to claim He travelled to India in this timeframe to learn Buddhism. Hanson’s article depends heavily on the idea that indeed there were lost years of Jesus. It also revived the thinking of a man named Nicolas Notovich. Notovich was a Russian scholar in the late 19th century who claimed to find a papyrus in India describing Jesus’ journey and education in India. Unfortunately for secularists who would jump on this, Notovich was proven to be a liar and a fraud by Max Muller. No such papyrus was found 2Groothius, Douglas Revealing the New Age Jesus. Downers Grove: Intervarsity Press. 1990 Still Mr. Hanson claims there maybe something to these arguments. Do these claims hold weight? Is it possible that Jesus was a Dhali Lama, a mystic of some mystery cult, or enlightened being? It is my intention through the next series of articles to demonstrate that these claims, in the light of the information scripture provides of Jesus’ formative years, in light of the transmission the of texts, in light of archeology, and most importantly in light of doctrine, ring hollow and are found wanting.

The arguments for Jesus as a guru or Buddha hinge off of the same misunderstanding of the New Testament texts. Jesus’ “lost years” are the proof to whatever false identity claim. Accordingly, Jesus left Israel during His lost childhood years to wander the East learn all of its mystical philosophies. Scripture does not allow for this though. The Gospels know of no such “lost” years. Luke 2:39-40, 51-52 states,

“So when they had performed all things according to the law of the Lord, they returned to Galilee, to their own city, Nazareth. And the Child grew and became strong in spirit, filled with wisdom; and the grace of God was upon Him… Then He went down with them and came to Nazareth, and was subject to them, but His mother kept all these things in her heart. And Jesus increased in wisdom and stature, and in favor with God and men.”

If there are lost years we should read how Jesus disappeared in his childhood, or how He travelled out of the land of Judah to an unknown place. Yet there is none of that in this passage. What the passage says is after fulfilling the purification code and sacrifice required in Leviticus, the family returned to Nazareth, where Jesus grew and became strong. Translated Jesus grew up in Nazareth. Add in verse 51 and 52 He advanced in knowledge (good school kid) and obeyed His parents. Essentially these verses are equivalent to today’s movie montage minus the cheesy 1980’s rock music. This doesn’t hint at lost years. Luke, the eyewitnesses, and sources (see Luke 1:1-4) knew exactly where Jesus was in His childhood – Nazareth.

The gospel of Matthew strengthens this position. Matthew 2:19-23 states that after a brief sojourn in Egypt the family returned to raise Jesus in Nazareth. Wait a sojourn in Egypt? Perhaps proof Jesus was really influenced by a different philosophy. Except Jesus was only a “little child” at this point. This Greek word is found earlier in verse 8 when Herod commanded the wise men to go look for the child. Herod shows how young this is when he orders the death of all children, “from two years old and under,” (Matthew 2:16). In the eyes of this passage “little child” is understood as younger than two years old. Jesus’ age, then, upon leaving Egypt was around 2 years old – too young to be seriously influenced by pagan thought. Further, just like in Luke, Matthew 2 is a summary statement. It shows, after maybe a 1 – 2 year stint in Egypt, Jesus returned and grew up in Nazareth as a normal Jewish boy. Luke and Matthew both place Jesus in Nazareth from the time He is a toddler to the start of His ministry. Space does not allow for a detailed discussion of Luke 4:16-30 and Mark 6:1-6, when Jesus was kicked out of Nazareth’s synagogue. Thrown to the curb with questions of:

“Is this not the carpenter? Is this not Mary and Joseph son? Are not His brothers and sisters here with us?”

The text demonstrates that the family was known in the city and established in the community. They knew them and weren’t shocked by a stranger. It was familiarity that bred contempt in the people’s minds. The gospels continually place Jesus in these “lost years” as a young Jew growing up in Nazareth.

There are no lost years. All of Jesus’ life is accounted for in the gospels. Summing up 30 years in 2 verses do not mean the years are lost. All a summation means is the author’s intent is fixated on another issue – perhaps the perfect sacrifice Jesus wrought in His death and the complete victory in His resurrection. The question may be raised, though, as to the historical reliability of these texts. To this question we will turn to next time.Ω

Chasing What God?: Examining The God Chasers by Tommy Tenney
The (No) Dating Game