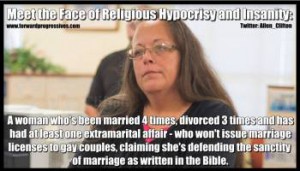 Last week I went on the record that Kim Davis should have resigned rather than go to jail. Lots of Christians disagree with me. Mike Huckabee disagrees with me. Some have even compared her stand with Martin Luther King’s decision to go to jail during the Montgomery Bus Boycott. Other people however have seized on Davis’ marital situation that reads a lot like the woman at the well in John 4. Davis has been married four times and had at least one extra marital affair which resulted in children. Is Davis a hypocrite for defending traditional marriage given her history of making a mockery of it?

Many have commented on the fact that Davis herself has been divorced several times. As a strategic matter, this makes her a rather poor poster child for “traditional Christian marriage”: Jesus himself treats divorce and remarriage as akin to adultery. But the point is not merely ad hominem: Davis’s willingness to impose a standard of marriage on gays that she does not apply to others, herself included, shows that she’s less interested in enforcing a consistent traditional Christian view than in singling out gays for disapproval.

I’ve interviewed John Corvino on the radio and he is a nice guy and way out of my league as a philosopher. John would be the first to admit as a philosopher none of that is relevant to whether he is right or wrong about Davis or Jesus. I agree that Davis isn’t the poster child for traditional marriage. But the question isn’t about whether she’s a good example but rather whether she is playacting at supporting marriage by the authority of God.

Corvino and I both agree that Davis should have resigned instead of going to jail. I claimed that Davis was not evenly applying the Christian standard since she still recorded divorces in her capacity as County Clerk. True, divorce isn’t categorically condemned in the New Testament whereas homosexuality is.  But my claim was stronger. Davis couldn’t apply her standard of “God’s authority” to every aspect of her job including the issuing of licenses to businesses such as strip clubs, gas stations that sell porn etc., But Corvino says that Davis is “applying a standard on gays that she does not apply to others.”

Corvino doesn’t say what this standard is exactly. It can’t be fidelity because gay couples presumably pledge to love each other exclusively just like any other couple. So the standard must be something like, “Davis imposes a standard that gay people can’t get married because she values marriage as sacred yet she really doesn’t value marriage that much since she tends to play fast and loose with it.”

Of course, you can anticipate the objection: but if she became a Christian[1.It is unclear that Kim Davis is a Christian as the group she joined are Oneness Pentecostals which deny the doctrine of the Trinity, one of the core teachings of biblical and historic Christianity] after this serial monogamy, she is forgiven. That is her past. She’s only a hypocrite if she prevents gays from getting married because of how sacred she holds marriage as a Christian and now were to commit adultery. In another column,  Corvino disagrees and quotes the Gospel of Mark to prove it.

Notice that, in Jesus’ words, divorced and remarried people are not people who did sin (past tense) and then had their slate wiped clean. They are people who are sinning, as persistent and unrepentant adulterers. Why isn’t there “grave danger in that”?

I respect John Corvino as a philosopher but his biblical exegesis leaves much to be desired. To quote many a gay person on the receiving end of a quotation from Romans 1: 27– “You can’t just take a verse out of context and use it to make your point.” Jesus does say this about adultery. However that is not even his last word on divorce in the New Testament. Since Jesus also says clearly in Matthew 5:32

But I say to you that everyone who divorces his wife, except on the ground of sexual immorality, makes her commit adultery, and whoever marries a divorced woman commits adultery.

Is this a contradiction? Not really when you consider that Jesus’ audience already assumed the exception for divorce. Jesus mentions the exception in Matthew because he is weighing in on a debate about what conditions is it acceptable to divorce not whether anyone can divorce at all. Some Rabbis thought it was okay to divorce for nearly any reason. Others thought divorce was mandatory for adultery.

Context is king. In the passage John Corvino cites, he claims that  “commits adultery” is present and persistent. Anyone who is living with a woman who is divorced is unrepentant and continually sinning. Kim Davis may have been a giving Larry King and Elizabeth Taylor a run for their money, but this passage does not imply that someone “continually commits adultery” when they marry a divorcee. This would imply that Jesus is saying the woman is still married in the eyes of God to her first husband and committing adultery when she engages in sex with her current husband. There is little evidence for this interpretation. In fact there is good reason to think that it isn’t true because the Torah seems to imply it is false. Jesus paraphrases Moses in Matthew 19:8

He said to them, “Because of your hardness of heart Moses allowed you to divorce your wives, but from the beginning it was not so.

I think we can assume Jesus is working within Moses’ tradition though he wants to point to the importance and sanctity of marriage in his new kind of living he calls The Kingdom of Heaven. What’s interesting is that Moses implies in Deuteronomy 24 that when a divorce is granted, the person is not still married in the eyes of God. If she was, then she could simply go back to her first husband in order to keep from living in sin. If she is divorced from her second husband or he dies, she is not still married to her first husband. She would have to marry him again.  Moses says that is something she should not do (Deuteronomy 24:2-4). This implies that she is not still married in the eyes of God to the first man.

The point is that Kim Davis isn’t a poor example of the sanctity of marriage because she’s presently committing adultery since she was previously divorced. You certainly can’t use Mark 10:11-12 as a proof text. It’s just not that simple. (No doubt those on the other side of the Biblical debate about homosexuality could say the same about using Romans 1: 27 as a proof text, but that’s another blog.)

So if Davis isn’t a hypocrite because she’s committing adultery with her present husband, then is she a hypocrite at all? I have no idea and neither do you. All we have is her testimony.

“Following the death of my godly mother-in-law over four years ago, I went to church to fulfill her dying wish,” Davis said. “There I heard a message of grace and forgiveness and surrendered my life to Jesus Christ. I am not perfect. No one is. But I am forgiven and I love my Lord and must be obedient to Him and to the Word of God.”

I mentioned in the last blog that there is something wrong with Christians who blithely allow leaders who admit grave sins to keep on serving in leadership. I mentioned that many non-Christians see this as cheap grace. However, the flip side is that Christians really do believe that people who give their life over to God are truly forgiven. They are a new creation. To non-Christian in general and a secularist in particular, the very idea that someone could simply have their soul wiped clean in the eyes of God is just offensive to justice and good taste:

That’s why Davis is such a heroine to the religious right. There is nothing in your past that can disqualify you once you have repented. All your sins are wiped clean. In fact, that Davis once violated the sanctity of marriage with abandon actually makes her even a better heroine in the eyes of conservative Christians. She’s seen the light, proving that nothing is impossible if you only believe.

But for the world that Davis inhabits, it’s just another contradiction to sweep away. Her past doesn’t count against her because she is forgiven, no matter how much damage she has done.

Yep. You got us. Grace is offensive. It is also the one uniqueness of Judeo-Christianity compared with other religions. The story is told that some people were once arguing about what made Christianity so distinctive amid other religions. C.S. Lewis was supposed to have answered, “Oh that’s easy–grace.” The author above is scandalized by the seemingly easy answer that is grace.  I love what this Jared Wilson, a pastor has to say on his blog about how early Christians might have had to accept grace or be scandalized:

Imagine you are one of the early church’s first members. You are sitting in a home with a few other believers, sharing a meal. You pray together. You sing a few Psalms. Someone recites a bit he’s heard of Jesus’ biography. Then someone gets up to read a letter to you from some guy named Paul.

Paul is a guy who used to go by the name Saul. It’s possible he is responsible for the murder of someone you know, perhaps even your parents or one of your children. Now you have to sit and listen to someone read not just words from this guy, but instructions from this guy. Since his conversion from Christ-hating enforcer of the Law to card-carrying Jesus freak, he’s not just one of your fellow Christians. He’s an authority over all Christians recognized by nearly everyone.

And yet Paul is not accused of hypocrisy because of what happened before his conversion. Am I comparing Kim Davis to Paul? Not by a long shot. I recently heard that Davis’ Apostolic Church denies the trinity so she believes a Christian heresy (Modalism). However, she’s not a hypocrite by Christian standards just because she used to be a serial monogamist.