Once Upon A Time… Plus Chance!
The Hysterical Search for the Historical Jesus 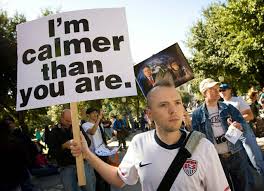 In the past I have written about the moral divide between Christians and Secular worldviews. This divide can be explained in terms of worldview or culture, but I like philosopher and Christian H. Tristam Englehardt uses: moral strangeness. Here’s how he defines moral strangeness:

This moral strangeness has shown up so much over the last few months as people who rarely read the Bible at all want to school all the benighted Evangelicals about just what Paul or Moses meant when he wrote that stuff about homosexuality and anyway you don’t follow all the commands of the Bible since you don’t own slaves or wear mixed clothing. Besides Paul was a bigot. Jesus was cool. He never condemned homosexuality. In fact, if you take the Greek just right, you can turn a centurions request for Jesus to heal his slave into a loving, affirming gay relationship. There are alternative ways of reading the Bible and living with it.  We’ll even put it in a flow chart for you: 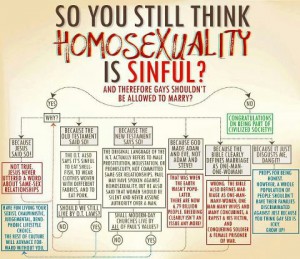 Notice that if you even think we should live by all the values of Paul, then “have fun living your sexist, chauvinistic, judgmental, xenophobic lifestyle choice. The rest of the culture will advance without you.”

Yeah, the Bible’s okay and all but Paul was evil, so we don’t really think of him as an authority. Besides, he wasn’t condemning committed loving gay relationships anyway. One columnist just doesn’t understand why Franklin Graham just doesn’t adopt the cooler, more loving interpretation of all that Greek in the New Testament? Why have you just now heard about this exegesis of cool? Well, you see, we’ve all been fooled by 2,000 years of Church history where stuffy men translated the bible in a way that would stave off the progress toward gender equality. But praise God, now there are those who will question those stuffy institutions and offer us a new and loving way. And why, oh why, won’t these Christians just get with it? Here we’ve solved those pesky Biblical passages for you because we can show that terms in Greek can mean more than one thing. Paul’s talk of sexual immorality could, could, mind you refer to temple prostitution and not anything like the loving, committed, same-sex relationship. So let’s take it like that because well it allows us to be loving and inclusive (because those are the same thing right?). And why wouldn’t you adopt the interpretation that makes things easier and more loving etc.? A valid question that I would expect from a moral stranger who sublimates their own freedom to nothing and no one.

Jonathan Rausch has some sympathy for the beleaguered and besieged segment of the Christian church that just can’t let go of their preoccupation with the Bible.

Evangelicals stand alone in their strong opposition to gay marriage in particular and to homosexuality more broadly. Most American Catholics support gay marriage. So do most mainline Protestants. Pope Francis, while not revising doctrine, is dramatically softening the church’s tone on homosexuality. The Church of Jesus Christ of Latter-day Saints has done the same, helping to pass a breakthrough anti-discrimination law in Utah.

Hmm. I know a lot of Greek and Russian Orthodox Christians who would be a bit insulted by the comment. Pope Francis hasn’t, you know, accepted the new cooler, loving interpretation of New Testament but we’ll give him a pass because the tone has changed.

… support for same-sex marriage has doubled among evangelicals over the past 10 years, and that trend is largely driven by movement among younger evangelicals toward greater acceptance of homosexuality. These young people do not believe God’s word has changed, but they disagree with their elders who disproportionately prioritized anti-gay rhetoric and doctrine.

On this Rausch is right. What he could have said is that younger evangelicals are tired of the political theater among evangelicals regarding homosexuality as if the Church’s sole purpose is to preserve an America going down the tubes. Indeed that’s largely Francis’ change of tone. It’s a change of emphasis. Cal Thomas recently pinpointed the kind of religious/political actions that young evangelicals are questioning:

The “culture wars,” while well-intentioned, were a mistake from the beginning. Evangelical Christians, whose Leader said, “My Kingdom is not of this world,” thought they could organize people of like mind and like faith and create a voting bloc to elect people who would impose something resembling that other kingdom on people who do not see themselves as members of that kingdom.

But setting aside the misguided and sometimes ugly things Christians did when they attempted to influence public policy, Rausch thinks there is something deeper going on:

Where an older generation simply did not tolerate homosexuality, younger pastors understand Jesus’ message as inclusive. Citing, for example, John 4, where Jesus pointedly ministers to a woman who lives in adultery and is a member of a pariah group, these younger pastors will not close their doors or hearts to gay people seeking God’s love.

I’m not sure what Rausch means by not-tolerating homosexuality. I’m sure there are lots of stories to the contrary but I don’t think this generation is more loving than the last generation when it comes to welcoming and loving people who are willing to accept their sin as the woman at the well. “Come; see a man who told me everything I ever did. Could this be the Messiah?”  I have watched this happen time and again. A Church community accepts someone who is gay and invites them to Bible studies and answers their questions. At some point the person realizes not only are these Evangelicals not ogres but they care. While never compromising their understanding of scripture, they loved this person and patiently broke down their barriers. Many of these gay Christians went on to follow the Lord, leading a life of celibacy. Some even married and had children. Is this some new phenomena? I don’t think so. However the concept that someone could sublimate their sexual desire to following the commands of scripture is just baffling. Here’s Rausch again;

A number of pastors say their churches are urging and sometimes helping gay congregants to be celibate. While less harsh than kicking gays out, this compromise position is untenable. Why would God create gay people for a life without sexual intimacy and loving companionship?

Why would God create people and not let them have sexual intimacy? Rausch completely ignores that Christians have been doing that for two millennia. Priests, Nuns, anyone who abstains from sex until marriage, the Apostle Paul, Jesus himself. It’s as if Rausch simply can’t fathom a God that would require that kind of sacrifice from anyone who loves him. A loving God would never do that, right? But I understand. Outside of a religious worldview in general and a Christian worldview in particular, sex is a really, really fun and bonding and cool. Why would anyone deny themselves this wonderful thing?  Well there’s one confusion here that moral strangers don’t really get:

Warning: Tell this to someone who is not a committed Christian following Christ and they will look at you as if you have two heads and just proposed that we ordain fish as deacons in the Baptist Church.

God is more interested in my holiness than my contentment.

That’s complete gibberish to someone who doesn’t hold to my view of God. That God is unpleasant sometimes. That God says, “Take up your cross and follow me.” That God says, “Whosoever loses his life for my sake will find it.” That God, though loving, is also judgmental. I would give up that God for the cool, completely inclusive God if I could but see I don’t get to choose the God of the Universe.

So when my feelings, my deepest desires, even my cherished hopes and dreams break against the unmovable rock that is God expressed in the story of the Bible, my feelings (gasp) aren’t the most important thing.

That’s easy for you to say, mister has-a-wife-and-kids-and-gets-to-have-sex-and-a-life-time-girlfriend. You are right. It isn’t easy. I don’t want to make holiness ever sound easy.  And I do know what it’s like mister-talks-with-dashes. I was married at 21 and was celibate up until the day I married my wife. Then my wife divorced me because she wanted to have a relationship with someone else. Her feelings got in the way of our commitment. And then I was celibate from 1999 ’til 2005 until God graciously allowed me to marry my present wife. So yes I do know what it means to sublimate my sexual desires.

But there are people like Wesley Hill, professor at Trinity School of Ministry, who will be doing it for the rest of their life. And people like Wesley are so, so out of my league. Rausch is wrong to dismiss their holy service with “But don’t you want to be happy?” Furthermore, it is condescending at the least to suggest that those celibate people can’t have intimacy and companionship unless they are having sex with the right person as Rausch casually does. Those Christians who choose to live a celibate life for whatever reason are nothing less than heroes in my eyes. They should be in yours too. It may be that when the kingdom of God fills the earth as the waters fill the sea those people will be rewarded beyond measure because they did what many of us cannot do. They gave up their whole life, soul and body.

Once Upon A Time… Plus Chance!
The Hysterical Search for the Historical Jesus