Somebody Blew Up Alderaan! Now What?

The Princess and The Pauper
Amazing Grace

By now, you’ve been inundated with stories and celebrations, celebrations and commiserations. In fact you may be feeling a bit like this: 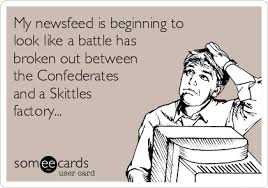 If you are a Conservative Evangelical then you’ve been seeing a lot of commiserating along with, I’m sure, a fair bit of anger and no doubt many dire predictions about the future.

In the Hitchhiker’s Guide to the Galaxy there was a planet called Ursa Minor Beta where the titular guide was published. Ursa Minor Beta was a planet that had the unique feature of being locked in time. It was always Saturday afternoon just before the beach bars were closed. In the minds of a lot of Evangelicals our world should always be a warm spring day in 1967 before the Summer of Love kick started the sexual revolution. Which is not a bad place to visit but its not a political strategy and it is emphatically not a gospel imperative.

Now you might quibble about just what year our own little Ursa Minor Beta here in America should be set for. Maybe its 1950 when Leave it Beaver premiers. Maybe its later. Friend and columnist, Hunter Baker, writes in the National Review about a time when our culture’s mores were consistent with those of the Christian worldview :

Was it once common for Americans to delay sex until marriage? Yes. Did they once avoid divorce if humanly possible? Did the law once lend its authority to chastity and the preservation of marriages? Yes. Unquestionably. But once the birth-control pill, legalized abortion, and the removal of legal sanction changed the calculus of consequence, Americans moved in a different direction en masse. It wasn’t a desire to be faithful to God and his design that sustained more traditional sexual behaviors. It was a flatly utilitarian calculation. Once that changed, America changed. I don’t think it was ever going to be possible to maintain the old consensus on marriage, including gay marriage . . .

And let’s be clear, apart from the particular set of moral assumptions about human nature Baker mentions, (what C.S. Lewis called the Tao) objections to gay marriage seem silly and ad-hoc. There’s no good reason for the modern American to oppose gay marriage. As Baker says,

The secondary headline in the Obergefell v. Hodges Supreme Court decision is that cultural Christianity is clearly terminal. It died in the big cities many years ago. Obergefell will help finish it off in the South. Most southerners will be just a hair slower on buying into gay marriage, but they’re modern people just the same.

Don Veniot and I have argued here that it might go even farther back to 1825 and the Second Great Awakening. We’ve been trying to tell a story for a while now where Evangelicals abandoned theological study and doctrinal training in the wake of great emotion and individual religious experience. A very large group of Christians stopped trying to facilitate cultural transformation by teaching good theology and loving their neighbors, and instead opted to concentrate on felt needs and individual mystical experience. Without pastors and preachers who passed on doctrine and the skill of Bible study as part of discipleship, the culture accepted the heady brew of individualism but without the theological chaser. Christians retreated from universities to hunker down in their own self-imposed ghetto and sang hymns. A hundred and fifty or so years later, Christians emerged from their stain-glassed cocoons and found a culture that had adopted their freedom but not their worldview. In a panic Jerry Falwell rallied the troops.

Except the troops didn’t know how to affect culture by winning hearts and minds anymore. Besides that kind of first century cultural engagement was too slow. We needed to change culture fast lest we suffer alienation.  So a new strategy was devised.Take up the sword of political action and by God, make sure our culture stays, like Ursa Minor Beta, perpetually in the fall of 1967 or just before Roe v. Wade or whatever. Political engagement wasn’t a strategy it was the strategy. We settled for family values through legislation as the conciliation prize for losing the hearts and minds of our culture. We put our hopes in a single political party and were surprised when in the new millennium, our Christianity had become a key part of our politics rather than the other way around.

But Ursa Minor Beta was a planet in a science-fiction story written by an atheist. And unfortunately, the thought that Evangelical Churches could sustain themselves on the political project of creating America in their image, full of well behaved non-believers happy to receive complementary Christian t-shirts funded by the sale WWJD bracelets was just as fanciful (and could have been gleefully plotted by an Atheist).

Justice Kennedy just blew up our Alderaan with a Death-star.

Baker might not quite agree with all the plot elements of my story he does articulate why so many politically minded Christians are in mourning.

Why does Obergefell fall so heavily? It’s a little bit like being a child whose parents’ marriage is slowly disintegrating. But for years they held on. The kid knows a divorce is probably going to happen. The things that tied the family together have slowly been broken or dissolved in a long and painful process. But right up until the moment when it really happens, the child has hope. The parents criticized each other, refused to give credit, were eager to assign blame. And now it feels like it’s over. It’s not just over. Some people are throwing parties to celebrate. They’ve been hoping for this divorce for years and are thrilled to see it happen.

Baker is clear that this is divorce with no hope of reconciliation. “No amount of David Barton-style arguing about the genetic traditions of the United States is going to put the marriage back together. There is probably no special romance, no weekend in the mountains that will restore it.”

Well then, what are Christians to do now? Well, Don and I hope to try and tell that story in the coming weeks here at the Crux, so stay tuned. But, for starters we should recognize that our little vacation spot in spring of 1967 wasn’t the most important thing worth fighting for. We might want to even repent of some of our idolatrous worship of our little Ursa Minor Beta.  The American experiment certainly included a Christian worldview from the beginning but the Gospel didn’t first grow wings at the signing of the Constitution and it won’t plummet into oblivion the more elastic that Constitution becomes. It will be painful to let go of our Ursa Minor Beta where its always a spring day in 1967 and everyone pretty much likes us but we will emphatically not need to forge some brand new identity as strangers in a strange land. We never should have tried making it our home in the first place. We’ve always been strangers. In fact, maybe we should start imagining a different, older Ursa Minor Beta where we are on our way to church on a Summer afternoon just before sundown, Rome about 65 A.D.

The Princess and The Pauper
Amazing Grace