Moral Clarity and the Good Wife

White Knuckling It
The Resurrection Probability

The characters on CBS’s ”The Good Wife are often, to be kind, morally challenged. The characters are lawyers, so the fact that they are portrayed as liars who will do or say anything to win their case, may reflect what CBS thinks of lawyers in general, but of course that does not make it morally right. Likewise, in their personal lives, they live completely according to their own 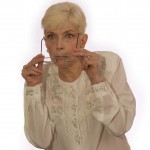 whims, sexual and otherwise, with no regard for God or His word, yet they see themselves as good moral and ethical people. Therefore, it is often difficult to like the characters with the lies they tell and the tricks they pull in order to triumph. But one character we usually do like, is Diane Lockhart (played by Christine Baranski).The show is set in Chicago, IL, which is a good setting for dirty tricks and even dirtier politics. Diane Lockhart is a staunch liberal, like the other characters, but she is more fair minded than the others, and is even able to be tolerant of people who believe differently than she does. Imagine a tolerant leftist! Liberals speak constantly of “tolerance,” but do not practice tolerance towards those who hold a different point of view. “Tolerance” is generally only extended to people that they agree with, which of course is not tolerance, but we digress. Diane Lockhart is a classy lady who seems more in the tradition of 1950’s-1960’s liberalism. The creed of liberals in those earlier times was as follows: I may not agree with what you are saying, but I would fight to the death for your right to say it! I remember liberals saying it when the ACLU fought to allow a ragtag group of Nazis to march through Skokie, IL, a suburb of Chicago with numerous Jewish residents, many of whom were Holocaust survivors. They won – the Nazis marched, most people ignored them, and life went on. The average American in that long ago era thought that ideas should be freely expressed, or not, and that any issues that divided us should be resolved at the ballot box. Of course the 60s brought the rise of angry radicals who were determined to change America through riots, taking over University offices, and often violent disrespect for “the man.” But most Americans were not radicals, and did not appreciate the views and tactics of radical self-styled “revolutionaries.” Americans were generally a law-abiding people who wanted peace and order to prevail. Violent or coercive tactics were seen as “banana republic” devices, having no place in the America we knew.

But back to The Good Wife. Last season, Diane met and fell in love with a man who is a staunch conservative, a firearms expert who defended the Second Amendment with passion. Even though they held very different worldviews, the two married. Sparks flew at times, but their love always won out. It was an interesting story line for us, because the issues were usually discussed with mutual respect, and a show on CBS allowed the conservative position to “win a few,” not something that CBS is known for.  And Diane learned to shoot a gun, and even liked it! This season the producers introduced yet another conservative for her to spar with, a billionaire character named Reese Dipple, who funds conservative and Christian causes. Reese is as committed to his conservatism as Diane is to her liberalism, and relishes the challenge of debating cultural issues with her. We all recognize that Law is a funny thing – something may be legal but not morally right, and often morality is not legally protected. Diane is good at the legal arguments – she is after all an attorney – but often does so at the expense of what is morally right.

This week’s controversy concerned two competing “civil rights,” the right of religious people to reject performing services that violated their religious consciences vs the right of same sex couples to be served by Christian bakers, wedding planners, florists and others who felt they could not participate in religious events that they fundamentally disagreed with. Should a baker who is perfectly willing to sell baked goods to anyone be forced to participate in a religious ceremony which they hold as opposed to their religious belief? Dipple wanted to fund the defense of a wedding planner that refused, on moral and religious grounds, to plan the wedding of a same gender couple, but he wanted to know if the case could be legally successful. He wanted Diane, who is his lawyer and a liberal, to participate in a mock trial, at his offices, with Diane representing the gay couple, and he wanted her to give it all she had to win the case. In the process, she cast Reese’s nephew, who is gay, and whom he dearly loves, in the role of one of the aggrieved parties. The nephew expressed his hurt feelings that he was rejected as a client by the wedding planner on religious grounds. Diane did this to appeal to the emotions of Reese, stating that he needed to realize that there are “real people” involved.

In our experience, liberals very often appeal to emotions and feelings in defense of their positions. Of course, there are “real people” involved, but all laws affect real people. Conscientiously objecting wedding planners are real people as well; people who want their rights to be protected. According to law, rights are to be objectively respected, regardless of hurt feelings. However, the emotional weight of having someone you care about in an opposing position can be compelling.

One of the more important questions Diane put to the Christian wedding planner during the “trial” was, “Did Jesus condemn homosexuality?” The fact that Diane here uses Jesus and his views to buttress her position seems quite hypocritical, since she does not appeal to Him to affirm her own behavior, but nevertheless, we will address it. This is an oft used liberal canard and is essentially an argument from silence. It may be emotionally compelling until you think it through. No, Jesus never spoke directly to the issue of homosexuality or gay marriage, but that proves nothing. There are many issues Jesus did not address explicitly, but does that mean they are okay? Jesus never condemned rape, so should His silence on the issue be used to prove that Jesus had no problem with rape? Jesus also did not explicitly condemn pedophilia even though in His day the Roman men of means often had a catamite which was a young boy whose primary role was to have sex with the adult male. Somehow I don’t see Diane Lockhart arguing for accepting these acts on the basis that Jesus didn’t overtly forbid such behavior. At least not in 2015. Next year, who knows? Cultural “morality” is evolving at warp speed these days!

An argument from silence isn’t necessarily false, but it often is in practice. As it turns out, Jesus defined marriage in Matthew 19: 4-6:

He answered, “Have you not read that he who created them from the beginning made them male and female, and said, ‘Therefore a man shall leave his father and his mother and hold fast to his wife, and the two shall become one flesh’? So they are no longer two but one flesh. What therefore God has joined together, let not man separate.”

One man and one woman was the view of marriage that Jesus espoused. He was Jewish, and in reading the Gospels we need to consider the questions in the context of the Jewish community in the First Century. He defined marriage when He was asked about divorce:

“Have you not read that he who created them from the beginning made them male and female, and said, ‘Therefore a man shall leave his father and his mother and hold fast to his wife, and the two shall become one flesh’? (Matt. 5:4-5)

Jesus, as a rabbi (not to mention that He was fully God), did not condone sexual sin of any kind. Sex outside of marriage, even between a male and a female, was sexual sin. So, whether it is two people of the same gender, or two people of opposite genders engaging in sexual behavior beyond what God intended for mankind, which is one man, one woman, married, it is morally wrong. A person engaging in premarital sex, or a spouse having an affair, is doing so in rebellion to what God has said.

Like the character Diane Lockhart, many today are biblically challenged and appeal to emotional arguments to support their squishy “anything goes” morality, but they mistakenly believe they have made a valid argument. This is something they would not tolerate coming from the other side of the aisle.

White Knuckling It
The Resurrection Probability