WWMD (What Would Muhammad Do?)

Response to an Agnostic
"Love? I'm not buying it." 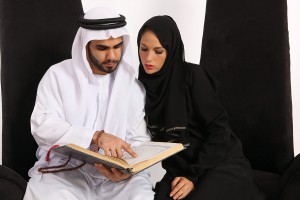 The first time I met and spent any real time talking with a Muslim was in 1993. I was at the centennial celebration of The Parliament of the World’s Religions . Joy and I were two of about a dozen evangelicals at the event which had somewhere around 6,000 participants from nearly every imaginable (and some unimaginable) religious group, from well established world religions to cults. Sometimes it was fun to just stand by and watch Mormons try to evangelize the Scientologists. We spent quite a bit of time in the main exhibition hall because the folks manning the tables were a somewhat captive audience. We enjoyed challenging their worldviews  and we found opportunities to share the gospel. We spent a considerable amount of time with the Wiccan groups, such as  The Fellowship of Isis and The Covenant of the Goddess. The theme of the Parliament was relativism. Tolerance and multiculturalism were the watchwords. The Gospel that was preached was that all religions are true in their own way, and no one religion has the right to claim to be objectively true. Each main group had a hospitality suite to allow those who were interested the opportunity to come in and get a feel for what they believed in a comfortable setting.

Joy and I went to the Muslim hospitality suite and found the delegate, his wife and daughter to be delightful. They even gave me a hardcover, gold gilded (not actual gold but gold paint) Qur’an. During the course of conversation we touched on the pagan religions that were at the conference  and Joy said to the wife of the delegate that she understood why the Wiccan groups, who are relativists, were attending the conference, but, Joy asked, “what were we (us and the Muslims – people who believe in absolute truth) doing here?” The response was touching. She said that Christians that she met had been very kind to her. At one point she was preparing to go back to her home country for a fairly long visit and was concerned about where the men would pray while she was gone, as they normally met in her home. With a smile she said that a neighbor, a Christian, came over and offered to open up and prepare the Muslim home each week while she was gone. She was deeply touched and was hoping that by coming to the Parliament she would be able to bring attention to the plight of her family and friends in her country of origin who were being killed by Hindus. And she wanted to be a part of a movement that she felt would promote peace between all people, no matter their religion. She was looking for the same sort of acceptance, in spite of religious differences, that she had found in her Christian neighbor. When I hear of tolerant Muslims today who are looking for peaceful co-existence in the United States and the western world, I am reminded of this lovely woman and her daughter.

Now, two decades later and living in a post 9-11 world, I have learned considerably more about Islam. The question comes to mind – was this tolerant gentle woman living consistently with the teachings and life of Muhammad, the Qur’an and Hadith, or is it ISIS and other violent Jihadist groups who most genuinely represent Islam as it was taught and lived out by Muhammad? Our current president and others assert that these cold hearted extremist murderers are indeed horrible but are not Islamic at all! So, to really evaluate that claim we need to ask, “What Would Muhammad Do?”

It has become standard practice to confront questionable Christian behavior by asking the question, “What would Jesus do?” A Christian can honestly answer that although Christians are flawed and sinful in this life, Jesus Himself taught – and lived out – righteousness and goodness. Jesus did not teach his followers to hate our enemy, but to love and pray for them, Can loving and tolerant Muslims look to a tolerant and loving Muhammad to pattern their lives after? Millions are rightly horrified by the beheadings, crucifixions, rapes and mass enslavement which are being done and proudly broadcast by ISIS. How can they commit these atrocities without a hint of shame? So we have to ask, “What Would Muhammad Do?”

We don’t really have to guess. There is a historical record in core Islamic texts which tell us. On the issue of beheading “Quoting Islam” points out the earliest Muslim biography of Muhammad records:

Then [the Banu Qurayza tribe] surrendered, and the apostle [Muhammad] confined them in Medina in the quarter of d. al-Harith, a woman of B. al-Najjar. Then the apostle went out to the market of Medina (which is still its market today) and dug trenches in it. Then he sent for them and struck off their heads in those trenches as they were brought out to him in batches. Among them was the enemy of Allah Huyayy b. Akhtab and Ka`b b. Asad their chief. There were 600 or 700 in all, though some put the figure as high as 800 or 900. As they were being taken out in batches to the apostle they asked Ka`b what he thought would be done with them. He replied, ‘Will you never understand? Don’t you see that the summoner never stops and those who are taken away do not return? By Allah it is death!’ This went on until the apostle made an end of them.

There is quite a bit of material demonstrating that Muhammad not only allowed slavery to be practiced, including sexual slavery, but supported these practices. For example, Sura 33:50:

O Prophet! We have made lawful to thee thy wives to whom thou hast paid their dowers; and those (slaves) whom thy right hand possesses out of the prisoners of war whom Allah has assigned to thee

The site Religion of Peace comments :

This is one of several personal-sounding verses “from Allah” narrated by Muhammad – in this case allowing himself a virtually unlimited supply of sex partners. Other Muslims are restrained to four wives, but, following the example of their prophet, may also have sex with any number of slaves, as the following verse make clear:

Qur’an (23:5-6) – “..who abstain from sex, except with those joined to them in the marriage bond, or (the captives) whom their right hands possess…”

Much of the slave trade which was going on in the 17th and 18th century originated with Muslims who then sold the slaves to Great Britain and the colonists. Although Britain and the United States have long since abandoned slavery, it is still practiced in a number of Islamic countries.

We have also looked on as Jihadist groups like Boko Haram abducted hundreds of young girls as sex slaves. Would Muhammad be opposed to pedophilia? We know what Muhammad would do because we know what he did. He took a 6 year old girl named Aisha as his wife and consummated the marriage when she turned 9. (see Muhammad, Aisha, Islam, and Child Brides for a detailed history on this issue).

My heart goes out to that family of kind and loving Muslims that Joy and I met over two decades ago, but if we look honestly at what Muhammad said and did, the Jihadists are the ones who are living consistently with life, practices and teachings of Muhammad, and the religion he founded. The kind Muslim woman’s desire for peace comes from somewhere other than what Muhammad modeled. As our friends at Apologia Report wrote in this week’s email issue:

In the Land of the Blue Burqas is a wonderful book about Kate McCord (a pseudonym), a courageous American sharing the gospel with everyday people during her five-year stay in Afghanistan. It includes the following dialog (p75) between the author and a friendly local Afghan whose family she was visiting:

“‘Is it true that every Friday when you pray, you ask Allah to convert me, and if I will not convert, you ask him for permission to kill me?’ … Finally the man said, ‘The mullah prays that. We just say “Amen”.’ … I pressed my question. ‘You just say “Amen”?’ The man was getting more uncomfortable. ‘Yes, we have to. The Mullah prays it. It’s part of Friday prayers.’

“‘Everywhere in the world?’

“‘Yes, everywhere in the world. Every Friday.’ …

“I was calm. ‘I am not going to become a follower of your prophet Mohammed.’ … ‘Do you want Allah to give you permission to kill me?’ I was smiling just slightly. … I still didn’t want to believe he really embraced the prayer he agreed to every Friday.

“The man finally took a deep breath and stood by his faith. ‘If you do not become a Muslim and God commands, I must kill you.'”

If the Prophet Muhammad spoke for God and lived in accordance with God’s direction, on what basis can we really say Islam is a religion of peace? The difference between ISIS and the family we met with in 1993 seems to be a matter of degree rather than of basic belief. The Jihadists are proactive in answering WWMD and aggressively carrying out  “the will of Allah,” whereas the average Muslim is not excited about the prospect, but they too must answer the question, What Would Mohammad Do, and then act upon it.

Response to an Agnostic
"Love? I'm not buying it."