The “I”s in Thanksgiving

There have been a lot of “I” statements going around the internet lately. Lots of celebrities holding up signs with various statements written (often illegibly) on plain sheets of paper and photographed with camera phones. 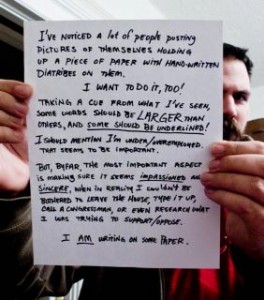 Some of these may actually be real and not Photoshopped. 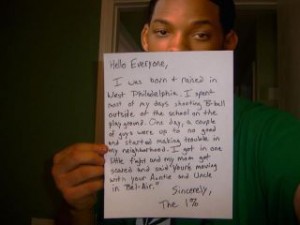 Then there are the trainwreck videos of people making demand

Do you get the feeling this is all about the “I”?

But thanksgiving is about the “I” as well. It is a moment in time when I give thanks for what I have been given by God. Thanksgiving isn’t just a day. It’s an activity. The act of Thanksgiving is about stepping outside of what “I” or “We” want to reflect on what we have been given.  It is also an inherently spiritual act as it is impossible to be thankful for things that occur by chance or one’s own design. So in that vein here is an “I” list because I don’t have any plain paper and I would much rather type. They are in no particular order. Make your own list on a piece of paper and maybe take a photo of it and include it in your post.

I am a father. I am thankful that this is so. I get the privilege of witnessing and facilitating the creation of virtue and character in another human being that bears not only my eyes or my hair but my name.

I am a husband. I am thankful for the incredible privilege of sacred marriage. I am thankful that my wife and I are not one of the 50% whose marriages have failed. I am thankful that God has called me to build something eternal with another human being who not only shares my bed, my bank account, and my mortgage but my heart and my dreams.

I am a friend. I am thankful for the incredible privilege of living and interacting with some of the greatest people. In a world where loneliness is staved off with anonymous chats with virtual relationships, I have people I can lean on them at 2:00 AM because I’m hurting and I won’t have to facebook them to do so

I am a minister of the Gospel. As is every Christian, but I have the privilege of defending the faith, edifying the body, and protecting the flock while loving God with all my mind.

I am a Christian. I have the indescribable joy and privilege of being in fellowship with the great I AM. Through nothing but the obscene grace of God, I am delivered, sanctified, and seated with Christ who calls me co-heir to a kingdom I have no business even walking around in.

I am an American. I recognize that there are people all over the world who do not have the privilege of living under the rule of law rather than the rule of men. While I may disagree with my government, I am thankful for its founding and its exceptional status as a haven in history for freedom from persecution and tyranny.