I Was Biblically Illiterate and I Embraced Socialism

The "I"s in Thanksgiving
Is Christianity Good for the World: Atheist and Apologist in Collision 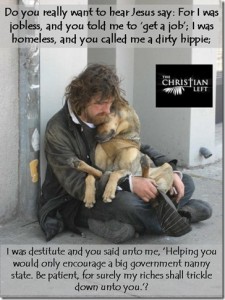 A friend sent me this little picture which many of their left leaning friends are putting in their emails and posting to their Facebook accounts. It demonstrates a lack of biblical literacy and a substitution of socialism for biblically based Christianity. I am not saying that they may not have genuine compassion on those in need but they do not have a biblically informed view of how to address the problem. It assumes that somewhere in Scripture there is teaching that it is the unbelieving, secular government’s responsibility to take resources from those who are working, investing, building businesses and yes, supporting charities of their own choice and redistribute it to others of the government’s choice. If true, the passage would sound something like this:

For I was hungry, and you didn’t allow the government to continue expanding the food stamp program for Me; I was thirsty,  and you tried to get alcohol and cigarettes removed from the food stamp program; I was on taxpayer funded welfare and you expected Me to get a job. I incurred college debt and you expected that I would keep my word and pay my debts.

Obviously, I could go on but you get the idea. This is a mentality that has been the hallmark of the cry-baby boomer generation. In the very insightful article, Listen Up, Boomers: The Backlash Has Begun, after describing the accomplishments of the generation preceding the cry-baby boomers, Walter Russell Mead writes:

All of this was done by a generation that never lost its confidence that it was smarter, better educated and more idealistic than its Depression-surviving, World War-winning, segregation-ending, prosperity-building parents. We didn’t need their stinking faith, their stinking morals, or their pathetically conformist codes of moral behavior. We were better than that; after all, we grokked Jefferson Airplane, achieved nirvana on LSD and had a spiritual wealth and sensitivity that our boorish bourgeois forbears could not grasp. They might be doers, builders and achievers — but we Boomers grooved, man, we had sex in the park, we grew our hair long, and we listened to sexy musical lyrics about drugs that those pathetic old losers could not even understand.

What the Boomers as a generation missed (there were, of course and thankfully, many honorable individual exceptions) was the core set of values that every generation must discover to make a successful transition to real adulthood: maturity. Collectively the Boomers continued to follow ideals they associated with youth and individualism: fulfillment and “creativity” rather than endurance and commitment. Boomer spouses dropped families because relationships with spouses or children or mortgage payments no longer “fulfilled” them; Boomer society tolerated the most selfish and immature behavior in its public and cultural leaders out of the classically youthful and immature belief that intolerance and hypocrisy are greater sins than the dereliction of duty. That the greatest and most effective political leader the Baby Boom produced was William Jefferson Clinton tells you all you need to know.

The selfishness of empowering and growing the government to “fix” individuals problems gives the impression of caring without requiring personal interaction or sacrifice. What we find biblically is simple to understand and in stark contradiction to this little poster.
First, we don’t find dependency on the secular government to be the all providing nanny state. From the passage which they distorted we find helping those in need is very personal. Individuals are being judged for their personal assistance to and involvement in the lives of other individuals. That is as it should be. Individuals can know if another individual or family they are familiar with is truly in need of assistance and are unable to provide for themselves. Governments cannot know the individuals in the same way. In addition, as my friend pointed out:

Anytime you have a government program you have to:

1. Hire people to run it, at the cost of their salaries and benefits, and other expenses associated with employee expenses. Not to mention some very highly paid management.

2. Find office space to run the programs from, this would be in all 50 states and in every major city.

3. Pay all the expenses associated with office set up, rent expenses, utilities, and other office expenses.

After paying all these expenses, then what is left? No matter what you do, it’s never enough. Most of the time, the money is mismanaged.

Second, we find in the Old Testament, guidelines for those with means to provide assistance for those in need. Farmers were not to glean the corners of the field for example. It was expected that those in need would then go to the field and do the work of gleaning to provide for themselves. They were not to wait a home, (provided for them by the government), for the government Agency of Gleaning to procure grain from the farm field and deliver it to the home of the one on welfare.
Third, they seem to be unaware that Jesus actually continued communicating after the crucifixion, resurrection and ascension. This would be the words in the later letters written by Paul and the other New Testament writers. Paul addresses this subject head on in 1 Timothy 5:3-16 with regard to widows. They were to be provided for by their families as the first line of defense. Only after exhausting the possibilities of family provision was the “widow indeed” to be supported by the church and even then, she essentially went to work for the church. There were things she was expected to do. We find nothing about relying on the government for their support. In 5:16 Paul writes:

If any woman who is a believer has dependent widows, she must assist them and the church must not be burdened, so that it may assist those who are widows indeed.

What did Jesus say through Paul about getting a job? In 2 Thessalonians 3:11-12 he writes:

For we hear that some among you are leading an undisciplined life, doing no work at all, but acting like busybodies. Now such persons we command and exhort in the Lord Jesus Christ to work in quiet fashion and eat their own bread.

Personal responsibility is a biblical mandate for believers. By getting back to biblical teaching on charity, the church and culture is strengthened. Requiring those who are able to work, to work, strengthens the community. If jobs are scarce, providing workfare rather than welfare is the biblical precedent. For those who are physically unable to work due to age or infirmity, reliance on family and friends is what we find in Scripture. Reliance on the church is the provider of last resort in order to conserve on its limited finances and even then there were strings. Those who were supported by the church devoted themselves to the service of the church. We find nothing about government welfare state provision. That this biblically uninformed rhetoric is allowed to pass for compassion is an indictment on the state of the church today. Forget occupying Wall Street. Try occupying a good Bible study!

The "I"s in Thanksgiving
Is Christianity Good for the World: Atheist and Apologist in Collision